NATE - SO unhappy t hear about your involuntary “sabbatical”.
Unlike “Wall-ee” who can’t resist using the first-person singular in over half his articles (regardless of the topic), I REALLY enjoy your always-informative articles on the wholehog blog/forum/website.

I’ve read newspapers all over the country (when newspapers were NEWSpapers, & only in print) & don’t recall ever reading the sports pages where the writers talked about themselves.

In fact, if it weren’t for writers like yourself, I would cancel my subscription to the ARDEMGAZ, because I’m so tired of Wall-ee talking about himself, his family or his alleged friends.

I mainly have continued my Gazette subscription only for Razorback sports. Since I’ve subscribed to Whole Hog Sports, though, the cancelation is being considered agin. And if YOU’RE having to leave, I sincerely hope they don’t ask Wall-ee to fill in such a HUGE WHOLE you’re leaving!!
Please know that I WILL remember you in my daily prayers. Please KNOW that readers from all over - not just in Arkansas - care, & will undoubtedly keep you in their prayers too. Whatever your affliction, recover soon & completely!

What’s the deal with Nate?

He is battling cancer. Prayers for Nate and his wife.

He has mouth cancer. He’s had multiple surgeries and treatments over the last five years. Some have been mildly successful, but it has always come back and in a worse way. This next surgery scheduled in June will be incredibly invasive and has risks. He has decided that it will probably end his writing. He will be at our Hall of Fame induction lunch today (as a member of the selection committee and past inductee). I think the lunch is more about seeing Nate than it is anything else.

As for writing in first person, that’s the way columns are written in most papers. It’s been encouraged at journalism school today. It was not encouraged in the day when Nate and I went to school. Not writing first person when you want to lay out a personal view is stilted and complicated. I didn’t write in first person ever until about 25 years ago when my dad told me that it should be done when a column is written to express your views. If you are not writing a column, you don’t do it.

Some of the oldtimers make fun of the younger set that will write in first person. Nate is one of those. I’m not. It’s just two styles that come from two different eras of teaching. If you want to write “I think” or “I know” or “I believe” or you are telling about something you and your wife did, We or I works. If you read papers all across the country, or the best blogs by the best writers, you will see first person style. I was extremely uncomfortable when doing that at first, but it is easier to read than the more stilted style of avoiding it.

I love Nate. I’lll be so excited to see him today, as I’ve been for the past 40 years.

Man. I’ve known Nate since my first day on campus in August 1978. Which tells you how long he’s been covering the Hogs.

There used to be a guy in Fayetteville everyone called Hoghead, who liked to take pictures of famous people wearing Hog hats, including this one of a future President: 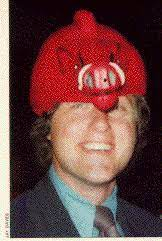 I believe his name is (or was) Jay Daves. Anyway, Hoghead always talked very slowly. And when he saw someone he knew, he’d say “looks … like … (fill in name)”. Jay was around the football team enough that all of us knew him.

So every time I’ve seen Nate since I left campus, I’d say to him, “looks … like … Nate … Allen”. When I think of Nate, I think of that. And I think of his tirades of frustration when he couldn’t get his Teleram (an early word processor used by journalists in the 80s to write and file stories) to work: “Why me? Why did I have to live in an era of technology?” And a few other words thrown in.

Best wishes, my friend. You got this.

Nate with a computer: I wish you could feel pain!