What is the “big lie”? Nobody is saying the virus isn’t real. It kills mostly the sick and elderly. Why can’t the rest of us get back to work and living our lives? It is not as bad as anyone predicted. We shut the world down based on terrible “models”. Not one prediction has come true. Some people act Giddy because of bad news. You did get one thing right, the New York govt. leadership has always been piss poor and they killed thousands because of their complete stupidity. You cannot run the country off a cliff because of a virus unless that was the goal from the beginning. We have never shut down the U.S. or the world for a virus. There is more at work here and if you are to blind to see it then I cannot help you.

No matter your opinion…the gathering of thousands will take place well before any college sporting event occurs.

Those who believe this to be overblown will test said theory and we will know the results well ahead of September.

I have no idea whether the decision in NY vis-a-vis nursing homes was good, bad, or neutral. Don’t know what went into the calculation. However, that had nothing to do with the huge number of cases or deaths there. What caused it as a hotspot was the number of people who brought it in from Europe in Feb & early March. New Orleans because a hot spot due, probably, to Mardi Gras.

We know this virus thrives in places where people are enclosed with each other. One little church in Arkansas had 92 people at an event; 34 infections, & 4 deaths. Seems to me the best explanation for why we haven’t had a huge outbreak in Ark is we haven’t had many such events since things started shutting down. Like Daytona said, we’re about to find out soon. Saw today that the city of Montgomery, AL has more cases than its hospitals can handle. Looks like Alabama is about to become a hot spot. Even Arkansas had a bad day today.

How on earth can I drink my delicious Pepsi with a mask on?

There is more at work here and if you are to blind to see it then I cannot help you.

I don’t doubt that there are those who like the fact that all of this hurts Trump. But that does not make all of this one big fabrication. It just means they harp on the bad news while they hope and pray that his “not wearing the mask” will end up with him catching Covid-19 and being a good example for why that was not a smart thing to do. I just don’t think the “we will just ignore all of this and it will all go away” is a valid way to live. It is very like the drunk driver thinking that his driving won’t hurt nothing. It is wrong and dangerous thinking and is justifiably a crime.

We have never shut down the U.S. or the world for a virus. There is more at work here and if you are to blind to see it then I cannot help you

We didn’t shut down the world. The rest of the world did that totally independent of us. The fact that every other nation in the world (yeah, I know, Sweden) did it kinda cuts against your claim about “more at work here.” You’re free to believe whatever you want, but this virus & people’s reaction to it are not some conspiracy to do whatever it is you think they’re conspiring to do. Some people might have over-reacted. Some regulations might go too far, but nobody is doing it for anything but legitimate fears of a very deadly, very contagious disease for which there is no vaccine or cure.

South Arkansan’s would never be seen with a Pepsi!

So,If I have covid-19 but I’m not aware of it and I pass it to 30 of my friends over a 30-day period and they too don’t show symptoms while passing it to others…etc…and etc…PLAY BALL and live life while its available.

The problem with your hypothetical is that it’s not what happens. We know some people apparently show few or no symptoms. We don’t know how many. We know that of the cases that have been confirmed, almost 6% have died. Most likely the death rate is much lower than 6%, but we don’t know how much. We also know that many people who’ve contracted it & recovered, nonetheless had a very bad illness & some likely have permanent consequences. If you’re young & healthy, scientists think you’re less likely to have a severe bout or die. But even if you’re one of the lucky ones, if you pass it on to 30 people, more than likely some of them will become very sick. If each of those 30 pass it to 30, the odds are that 10-20 of those will die.

That’s a shame because they don’t know what they’re missing!

Again, tell me why an infection now is less deadly than an infection two months ago. I have not seen anything to suggest that’s the case. The stories I saw don’t suggest the virus got less lethal over time, but do suggest that there were more infections over the interim period because there was not a lockdown.

Without getting too political, I’m not a Trump guy or even a Republican, and some of those guys and gals on Fox I just can’t bear. That being said…

The medical system was never overwhelmed in Louisiana. Nola.com has been running a daily total of available ICU beds and ventilators in the state since early on in the pandemic. The chart is broken down by districts. No district ever maxed out on either ICUs or ventilators, or really got very close. As with other places, the nursing homes got hit hard. High patient volume(and thankfully there is a consistent drop in hospitalizations) at the peak does not mean the system was overwhelmed.

I guess there could have been a couple of crematoriums backed up in Wuhan for a day or so. I think it’s probably likely a lot more people got infected in China than the ChiComs want to admit, and we know that some percentage of those who get infected will get sick and some of the sick will die. But assuming the Chinese fudge their deaths by a factor of ten that would still only be 46,000 deaths in the whole country, and the Wuhan region has 11 million people alone, which kind of suggests that maybe they have more than a couple of crematoriums in the area. So the back up probably did not last very long, and certainly does not support a narrative of bodies stacking up in the streets across the area.

Northern Italy has maybe the oldest population in Europe, and people tend to live close together there. So yes, they had a lot of deaths, and they did stress their medical system, though again the care homes(as the Brits call nursing homes) had a large percentage of their deaths.

I’m no doctor and I haven’t read anything to back up what I’m about to say, but perhaps after a couple of months of dealing with it, doctors have a better idea about how to treat covid patients. I know one study reported by the NYT shows chloroquine is actually bad for covid patients, so I assume there’ll be less of that.

As a practical matter, it seems to me as a layman that the disease is just as lethal now as it was 2 months ago & unless there’s a better treatment or cure, will be equally lethal 2-6 months from now. However, had we acted sooner to practice social distancing, one study from Columbia showed we could have significantly limited the spread of the virus. Places like Ark might not have any cases yet if places where it was found had closed down earlier. If Mardi Gras had been cancelled, there’d probably be a lot fewer cases in this part of the country. 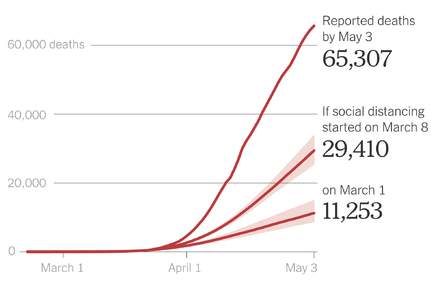 Even small differences in timing would have prevented the worst exponential growth, which by April had subsumed New York City, New Orleans and other major cities, researchers found.

One of the first casualties of COVID19 was accuracy in reporting. Beyond the fact that CV19 was brand new (and thus bound to create detours on the road to vaccines and cures, let alone preventative measures) it has managed to bring out the very worst in our social skills. And, it has inspired a treasure trove of purposefully deceitfully activity on social media. This report says 45-60% are purposefully false, attributed to “bot” campaigns from outside the US. That means, I think, that right at half of what we might read is not accurate. And, given how the bots work, those that read some are much more likely to read others just like it. So, it seems to those people like a ground swell of information. And, its all falsified for their consumption. 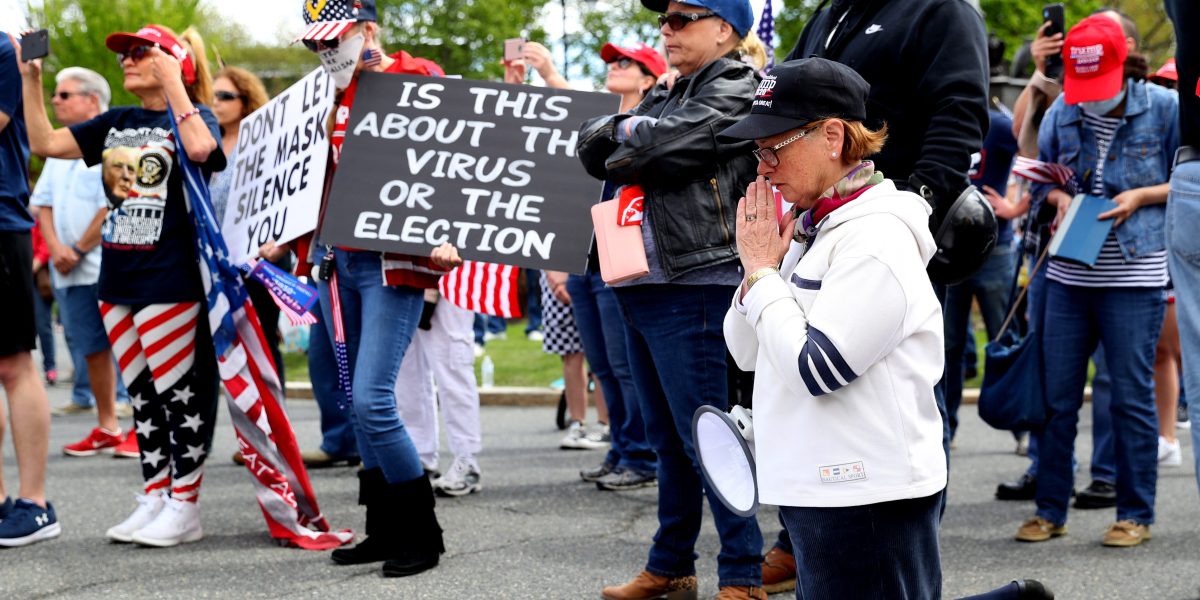 Kathleen M. Carley and her team at Carnegie Mellon University’s Center for Informed Democracy & Social Cybersecurity have been tracking bots and influence campaigns for a long time. Across US and foreign elections, natural disasters, and other...

It’s scary how susceptible we are to propaganda, especially if it confirms our already-held beliefs. My profession requires me to look for evidence rather than take almost any claim at face value, so I like to think I’m less susceptible to it than some, but confirmation bias is strong in all of us. We need help, however, in stopping foreign bots from spreading disinformation that will harm all of us in the long run.

Maybe that report is a bot…

Now that is hilarious, seriously, you had to write that
with a big grin. I had to clean up my spilled coffee.

I think everybody needs to listen to this guy closely. Guy’s been a doctor for over 30 years and IMO is just flat out telling the truth! He talks about hydrochloquine in some detail and I’ve heard many just like him talk about it. I am probably the least most political person in the world in fact, I hate politics because I don’t put my faith in politics, but this guy tells it exactly the way I would.I would ask you to please watch the video before you respond.

but this guy tells it exactly the way I would

As with all doctors and important matters concerning my health, I’d get a second opinion!