Wrote on the podium game of the ages from Trey Wade

As Trey Wade stepped onto a raised platform for his postgame interview Thursday, he smiled while talking on his cell phone. His brothers had called to congratulate him.

On a podium game for the ages vs. Gonzaga and Wade rising to the occasion: 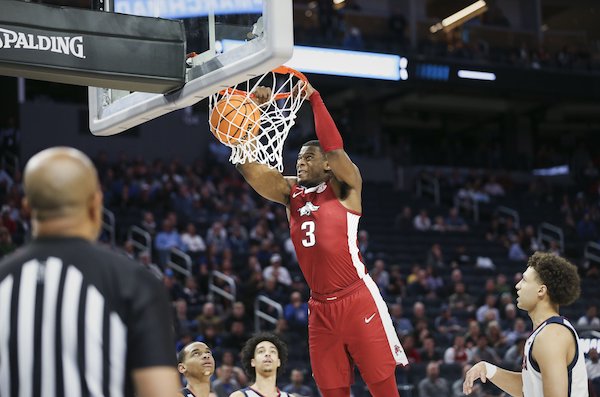 'It's what you dream of': Wade spectacular for Hogs in Sweet 16 win

Inside the Golden State Warriors’ practice gym at Chase Center, Trey Wade stepped through the black curtain that separated the hardwood floor from the postgame interview room with a smile on his face.

Good one Scottie. Wade did it all tonight. Hit big shots, blocked shots, outstanding defense on Holmgren.
Should elevate his confidence for Saturday.

Craftiness and savvy, yes indeed. Big time game on the biggest stage in college basketball. Trey Wade, thanks for being a Razorback.

I have wanted Wade to get the ball for open three point shots all year. He and Toney both are good at the three ball when they receive the ball with their feet set. I never flinch when either of them put up an uncontested shot.

When Wade hit the three that put Arkansas up 39-36, I thought it might be the Razorbacks’ night. All of those threes were big shots at that time in the game.

My friends and I have started calling it “The Trey Wade Game”. Don’t think there’s any doubt. Great piece!

Lost in al of the “Holmgren Foul Controversy” (Whatever) and the offensive game Timme had was that on all three of Wade’s 3 point makes…it was Timme that was lollygagging on defense that allowed the wide open set shots. Pretty sure both of JWills 3 ball makes was also when Timme was slow to get there.

Aloha Matt,
Spot on. My Son and I were thinking the same as you. Trey’s exceptional performance was critical for the Hogs. I am assuming he was open because of the coverage on JD and Muss gave him the green light.
UA…Campus of Champions