Wrote on Jadon Haselwood stepping into the No. 1 playmaker role

“He has a mindset that if he don’t catch it then nobody will," KJ Jefferson said of Jadon Haselwood.

Here is more on Haselwood stepping up and into the role of Arkansas’ No. 1 perimeter playmaker after transferring from Oklahoma: 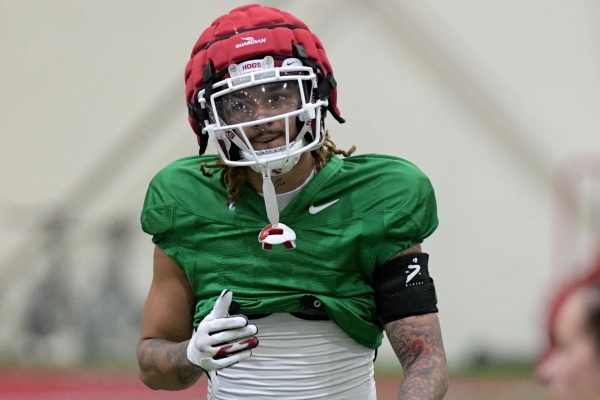 Great expectations: Haselwood a talent Hogs can lean on

Arkansas replacing the likes of Treylon Burks is a monumental task, but there is great optimism former Oklahoma receiver Jadon Haselwood can be the Razorbacks' next elite playmaker on the perimeter.

I’m hoping he can be a big play receiver, I don’t think he has blazing speed but is a good route runner has excellent hands and is great after the catch. Was really good in the red zone for Oklahoma

Was really good in the red zone for Oklahoma

I expect good things from him.

Went over to a youth football camp at the rec fields on campus a few weeks back. KJ Jefferson, Jalen Catalon and Jadon were there. Talked to all of them, and KJ raved about Jadon. Jalen made a comment to me about his size and physicality. Jadon was a fun, interesting interview. I don’t know if free spirit is the right way to describe him, but I kind of got that vibe. He’s a thinker, very thoughtful. Kendal Briles believes he can be the team’s top dog at receiver. Should be interesting to follow Jadon this fall.

5 stars from his area of Georgia normally end up at UGA; we’re fortunate.

Yeah he was very good in the red zone