Jaylin Williams is scoring and rebounding at steady rates lately. He’s been a real challenge to score on, too. A look at some of his numbers as an interior defender: 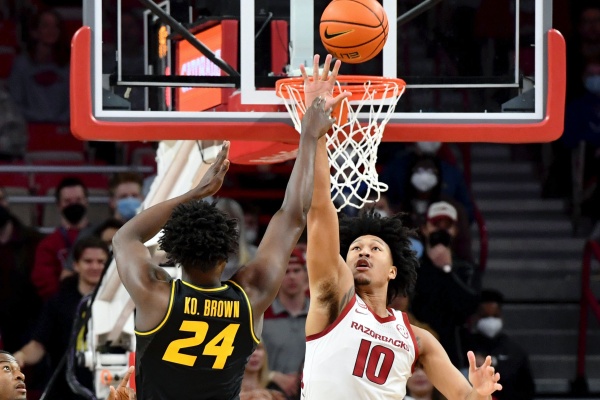 'He’s been phenomenal': Williams more than holding his own as interior defender

Jaylin Williams has drawn praise far and wide of late for his growing offensive skillset and knack for rebounding. His play as the Hogs’ defensive anchor has been vital, too.

A couple of my FB friends (HS classmates) think I know more than I do. They have asked me if J. Williams’ charges taken is leading the SEC. Help me look smart in their eyes. I think he has 24, but no idea where that stands in the conference, or nationally.

According to Arkansas’ game notes for the West Virginia game he has 25. I cannot imagine another SEC player being in the same ballpark as Jaylin in that area. Nationally, I’m not sure. Unfortunately, charges drawn isn’t an official stat, so it’s tough to know.

I’m so proud of the player he’s developing into…He’s got that great personality, no way in the world you can’t like the kid. He will continue to get better, with his newfound confidence in shooting I can see him getting double-digits every game.

He will continue to get better,

I saw one quote earlier in the week that said he wasn’t athletic enough for the NBA. But, his progress over last year has been uncanny. I wonder if athleticsm can be “learned” at an older age (not 5 or 6); I especially liked one of his slams during one of the last few games – that looked pretty athletic to me.

I don’t think He will ever be what most consider a great athlete but he makes up for it with his intelligence, like Muss mentioned his basketball IQ is very high. He does a lot of film study of his opponents and is in position to make plays far better than most who don’t really do those types of things… he’s a very good player to have on your team.

Basketball IQ can take a player a long way. I’ve seen the comments that he isn’t athletic enough for the NBA. (I’ll just add a “yet” to that).
He isn’t slow, clumsy, or awkward or looks lost with the ball in his hands. Very nice strike shooting the ball anywhere.
He isn’t a Kevin Durant by any stretch, but with some work in the weight room & getting stronger & little quicker I see him playing a role at the next level. Has a couple of years to work on that.

I hope we keep him for a couple of more years. I think we can compete for a Natty next year, and JWill will be a huge part of that. I also predict Devo and KK will be much more effective with the infux of talent…Jaxson too. I might be beating a dead horse, but I would hate to lose KK.

I hope we keep him for a couple of more years

I hope we keep him and Notae next year. If so, your team might not be the only ones with a ring

It looked like W Va could not score on him during the first half. What strong defense.

I don’t know how StatBroadcast comes up with some of its numbers. I really don’t. But it reads that Jaylin had 16 defensive stops against West Virginia. Pretty good.