His coach from Murray State is the new coach there right? 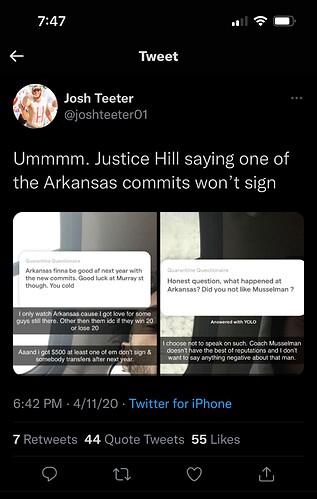 If the Hill crowd is unhappy now, they will really be mad after playing us twice next year.

That kid needs to quit running his mouth. It’s not helping his cause.

Juice has just guaranteed he’ll be the boobird when the Corndogs come to BWA next year.

Seems like I remember this message from 2 yrs ago

Maybe Jordan Walsh can knock a tooth or two loose.

man, oh man, do I hate to read that. I’ve pulled for Juice since hs, really wanted him to play for us, and I pulled hard for Murray State-specifically due to him. but this reads like trash, is this really his account? that’s Fitz’s son talking like that?!?! hard to believe, and if true, then I’m suddenly pulling against him. ugh, I really hope this is old news or not Juice at all. I work with some of his family, I’ll try to fact check in the am.

It’s a bunch of bull. The post is 2 years old and I think most people spreading it know it. Let him move on.

Because that is when it’s from. Old news.

It’s 2 years old. Bet he regrets it now. I listen to Fitz on the radio with Pat Bradley on Tuesday nights. No hard feelings towards the Hogs now.This is whole lot of nothing. Hate this thread even got started.

Yep, I thought it was old.

Sounds like somebody just trying to cause a stir.

No matter when it was posted by the young man let it go! Where he plays his college basketball has no bearing on our hogs. We are suppose to be the adults.

That post is so old. If you went to your dream school, then your coach got fired and the new coach said you may not play much the first year wouldn’t you be butt hurt at the age to 17/18???

Things worked out pretty good for juice. Now he gets to go with his coach to LSU and finish up in the SEC. Good for juice.

Now he gets to go with his coach to LSU and finish up in the SEC. Good for juice.

And he’ll never play in the Dance again. Bad for Juice.

Says who? You think the NCAA is going to make a decision on LSU before next season? If so it will be the fastest one yet. Look how they drug out Oklahoma State.

I’m pulling for juice no matter where he plays until he plays against us.