Would Muss ask players to leave to make room

For some reason I just don’t see him doing that but at this point he must know something we don’t. Some dudes will have to leave to make room for everyone we have coming.

Would he ask CV, KK and or Jackson to look for other schools?

If the Utah kid wants to come, I think you have to take him. I guess with the kid from Mizzou coming and if J Will stays, the Utah kid wouldn’t come anyway.

Was it whoever said yes first got the spot?

JWill is going to the combine, we don’t know what they’ll tell him.

If he gets a first round grade, he needs to go. The guaranteed first round money would be hard to turn down and he would have more money from that contract than most people make in their lives.

A second round grade means no guaranteed money. It also means that he can improve with another year with Muss and likely be a lottery pick. If would also mean that he can lead Arkansas to a FinalFour and quite possibly a national championship.

I would expect that he will find a landing spot for those who would not fit into his plans for next year. In those situations, both the player and the Razorbacks win.

If JWill is low first/early second it becomes a very tough decision. He is going to make some NIL money if he stays, maybe quite a bit, so if he’s not sure he will be a first rounder he may be better off betting on moving up to a solid first round choice in 2023.

On the other hand, if he blows up at the combine…

I said this in another thread about JWill a few days ago, I believe he announces for the draft, goes to the combine, gets his grades and then makes a decision (my personal opinion is he will be back).

gets his grades and then makes a decision

I’m thinking Muss has a pretty good idea of what a 1st rounder is.

Never said he didn’t, but I’m pretty sure Muss would encourage him to go through the process so he can have an idea of how it works

I looked at several mock drafts yesterday he was only in the top 30 in 2 of them, I would think that would be enough to convince him to not go to the combine. I kind of doubt he will, but we will see.

Muss realizes that his top 100 recruits want to play in the NBA and that is central to his recruiting pitch. He knows that the more Arkansas players go to the NBA, the task of replacing them with more talented players is much easier.

I can remember when a scholarship was for 4 years and the school could not cancel one. In those days, many coaches would contact other coaches and if the coach could use one of the coaches guys, the player could switch schools. But if a player attended classes and partiicpated in all football requirements, the school could not drop him.
But in those days the scholarship limit was around 150. Title 9 took care of that. 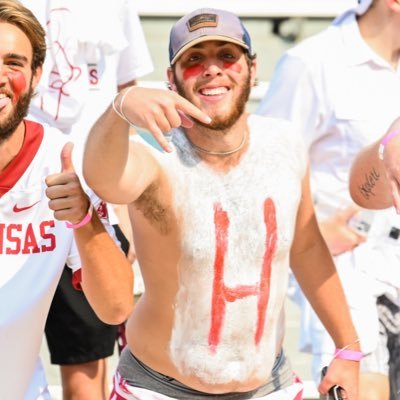 @joshteeter01
Hearing rumors that there is a legit chance that JD Notae could return to Arkansas for one more year. Notae would receive a lot of money from the NIL if he returns.
jeremy March 31, 2022, 1:01am #13

There are too many butts and not enough seats, Jeff. As I said in another thread, that means some guys we love can’t/ won’t be here next year. I’m sure Muss will help them find a safe place to land, like he did with Bay Bay.
That said, I have never seen a higher level of recruiting than what Muss is doing right now. It’s unbelievable. Brazile looks like the best parts of Ware’s game…with a better motor. Some of his dunks/ blocks are like Gafford 2.0.
Just incredible!

We’ll see some hit the portal soon. This year’s recruiting class is too good. I bet KK and Jaxon are both gone. I bet Conner finishes out his time w/o a schollie. I think he’s happy to be a part of the team and I don’t think he’ll be playing professionally.

Players don’t have to leave to make room.

He is coming back. I am certain of that.

??? Some guys have to go, because…numbers. You can’t have 20 guys on a college basketball roster. Please explain your thoughts.

The answer to that question is yes.

Why not? Is there a roster limit like football? UNC currently has 18. The Jayhawks also with 18 MSU with 18. Tell me why we can’t have 20?