Worst football hires in past decade 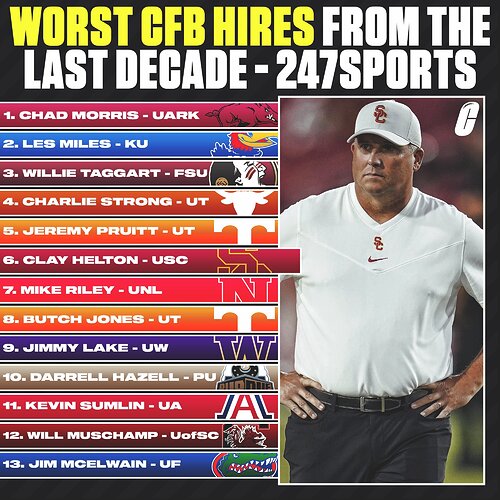 #11 - didn’t everyone but Az know at the time how stupid that was? I am not sure I wouldn’t put that at #1. Yes, Chad bombed the biggest of them all, but man, it was so clear that Sumlin couldn’t coach after his flame out at A&M

There are some odd selections there. Jim McElwain won two SEC East titles and Clay Helton won three division titles and the Pac-12 once. Were they the types of coaches that those programs expect? No, but they weren’t terrible hires. I’m sure you could find much worse.

Yes, Chad bombed the biggest of them all,

Chad would be my #1 worst for the last century!

Smile should have been # 2.
You could possibly put Bert in there based on the last 2 years.

You could possibly put Bert in there based on the last 2 years.

As hard as it is to believe, Bret actually holds a Razorback win record. He’s the only Arkansas head coach to win 2 consecutive bowl games. I really hope, in the next 2 years, Sam will break that record.

It is really hard to believe that between Frank, Holtz, and Hatfield that no coach but Bielema won 2 consecutive bowl games.

I’m rooting for Bret. Mainly because I want Barry Lunney Jr. to succeed.