Wrote about what I’ve found to be one of the most intriguing parts of Jaylin Williams’ game – the various ways he impacts Arkansas’ three-point shooting, from his own jumper to rim rolling and creating open shots for others to finding others himself: 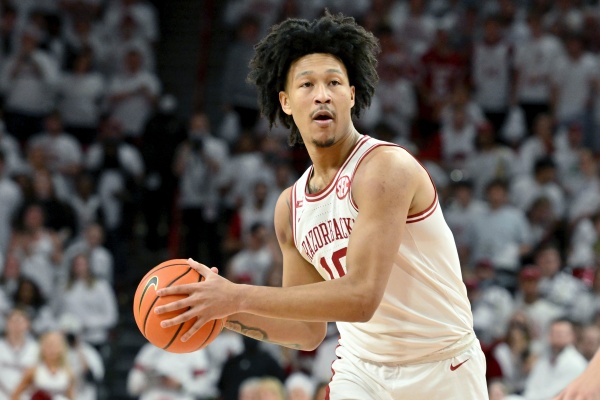 Over the last six weeks, Jaylin Williams has grown into one of the more valuable players in the Southeastern Conference.

Enjoyed any read on Williams.

Another question: has our fast break game fallen somewhat? It’s probably at Muss’ insistence, but it seems like on fast breaks we have a tendency to hold up and wait on all the other guys so we can pass the ball around, as opposed to crashing the board to take advantage of numbers.

Jaylin is one of my favorite Hogs…ever. I wouldn’t trade him for anyone. Nice article, Scottie.

I wonder if he made any passes in the game we ended our streak?

I love the guy. He plays hard and he plays very smart. He always seems to have a smile on his face.

When he is on the floor, the ball needs to go at least through his hands… When it does, good things happen more often than not.

Sure wish JD had passed the ball over to him Sat. instead of taking that crazy shot. Jwill may have missed also, but I bet it would have had a chance.

Did it seem to anyone else that JW was shooting the 3 with less arc the last couple of games? His shot seemed flatter to me.

Always seemed to me that most big men 6-10 and taller shoot long range with less arc.

He’s the heart and soul of the team. He verbally leads but more importantly he also leads by example. One of my favorite Hogs of all time. Love that plays the game with a smile on his face, it should be fun.

Yeah I could tell Jay will was not happy when JD threw up that prayer with him being wide open at the top of the key, you could see him kind of lift his arms up in the air and thinking like… I’m wide open!!

I’m sure JWill told JD, man I was wide open what up.

Wait, do you mean the 3-point streak or the team’s winning streak?

has our fast break game fallen somewhat? It’s probably at Muss’ insistence, but it seems like on fast breaks we have a tendency to hold up and wait on all the other guys so we can pass the ball around, as opposed to crashing the board to take advantage of numbers.

Sorry I missed your question. In non-conference games, Arkansas averaged 17.0 fastbreak points. In SEC play, the Razorbacks are averaging 10.4 per game. So yes, there’s been a decline there.

you got it right and answered my question. I think. the 3 pt streak. But now I’m curious, what about both games. Bama and the 3pt streak game.

Against South Carolina, Arkansas missed the lone 3 he set up. And at Alabama, the Razorbacks were 1 of 2 from deep immediately following a Williams pass. In the loss, Arkansas actually missed all five of the two-point attempts he created.