Will No. 1 QB recruit Ewers give up 7-figure NIL offers? 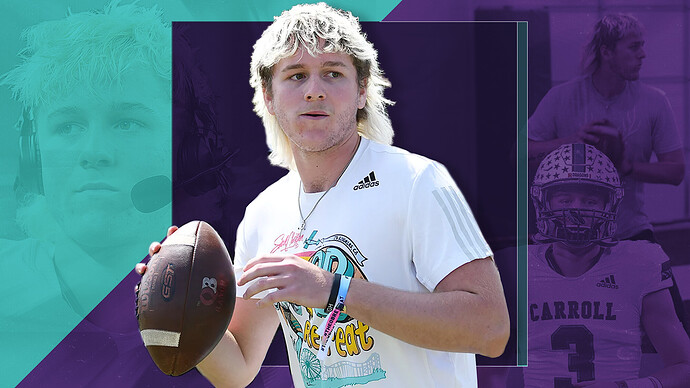 Will America's No. 1 QB recruit Quinn Ewers give up 7-figure NIL offers for...

Ewers has emerged as such a precocious and recognizable star that he has the potential to earn nearly a million dollars in the next year by profiting off his Name Image and Likeness.

That’s a really meandering story. They say he’s just heading into his senior year in high school. No mention if he has enough credits to officially graduate High School. Just that he’s thinking about “heading up to Ohio” and enrolling at Ohio State this fall. I know OH St has done lots and lots of cheating but surely they don’t allow non-High School graduates to enroll and play football. Of course they may not be adverse to getting him an extra 10 or 20 summer session credits on line over 30 days???

I should clarify my original statement: I believe he is contemplating sitting out his senior season, not year (and raking in NIL money the state high school association won’t allow) then enrolling at Ohio State next January. I think.

I believe he is contemplating sitting out his senior season, not year (and raking in NIL money the state high school association won’t allow) then enrolling at Ohio State next January. I think.

My post wasn’t responding to your post, but to Thamel’s actual report. I think your statement was correct, From Thamel’s report:

Ewers and his family are facing an imminent decision of whether to play his senior year without the deals or enroll at Ohio State a year early and cash in on endorsements. Ewers is expected to decide this week.

“I don’t really know, I don’t have a final decision made quite yet,” Ewers said in a phone interview on Wednesday. “I’m leaning toward leaving and going up to Ohio, just so I don’t have to deal with UIL stuff and can get comfortable with Ohio and Columbus and start to learn.”

Thamel clearly states their intent to enroll a year early. That would be this fall.

Wow. You are right. I just assumed Ohio State wouldn’t have an extra scholarship laying around for a high school kid who showed up a year early.

And you’re right. The story is meandering and confusing.

I would think the money would be there later. Bypassing senior year seems to be a bit much. You won’t ever get that HS experience again.

Gotta wonder what Arch Manning will be worth when his time comes.

Surely, surely, some recruits will still choose on the basis of relationships with the coaches. Chances for early playing time. History of developing players for the next level.

We can only hope,

He’ll be the trendsetter if he leaves and makes the cash. Other top recruits will follow.

He would play this fall. He lacks one class, which he is taking online.

Ewers is in a position academically where he could take one core English class online, graduate from high school early, and enroll and be eligible at Ohio State for the 2021 season. The family expects that course to be completed in time for him to take part in preseason camp, which begins Aug. 3. The Buckeyes’ quarterback situation is wide open heading into the season, as none of the three scholarship QBs have thrown a college pass.

I feel like a factor a lot of people aren’t considering here is Covid. I teach Senior English and I can tell you these kids haven’t had anything resembling a traditional HS experience. This group of Seniors at my HS haven’t seen a prom since they’ve been in school!

Could this be the start of a trend?