Why won't coaches come down hard on moronic behavior?

Last year the OM coach was remarkably uncritical of the dog peeing TD celebration incident. Incredibly Dan Mullen defended his shoe thrower’s incredibly idiotic action that may have cost the gators a spot in the CFP. I just can’t understand how these players can do such stupid, selfish things and then not be called our for it.

Mostly, coaches don’t treat college players the way fans do. One of the keys to understand that, often they refer to them as “kids.” Maybe there is a hint there. They are young.

I know these players are young and football is supposed to be fun, so I think this is the framework we operate in. On top of this we have developed a culture of 'hey look at me". The players possibly started seeing this in the professional arenas and since so many of these kids chose the professionals as role models, here we go. Add to that the internet, tik-tok culture and now we are moving the mind-set faster. I don’t like it, but as reminded frequently it is not about what appeals to my generation. Not that anyone should listen to me or my generation, because we sure had/have our faults, but it seems to me if we use the logic because these are old people values, that few if any are relevant to present times, even less to future times, what babies do we throw out with the bath water? Yes, change is inevitable and often beneficial, but hopefully there is some selectivity in who/what is driving the change process. Off my soapbox, at least for a moment.

So much stuff like that has been handled inside the walls of the athletic department here at Arkansas and other colleges.

Take D-Mac’s first of two run ins with the law at bars when he was playing for Arkansas.

He knew, his coaches, his teammates knew and fans of the program knew he was in the wrong.

HDN dealt with it internally and everybody moved on.

Yep, Nutt told him he was going to run him 30 times the next game instead of 20!

I understand the OM kid was devastated by the consequences of his actions. Sometimes there’s no reason for the coach to do anything. I’d bet that’s probably true of the UF kid, too, although I’m sure the Mullins will do something privately.

The Florida player probably needs mental help at this point. Fans have buried him on social media. His coach prob does not have to say one word.

You are probably right Clay. I realize we all do stupid things in life, especially when we are young. It is just hard for me to understand how someone who plays the game at such a high level, does not have more situational awareness. Do coaches need to bring in referees to explain the unsportsman like conduct penalty to the players? I can understand a player retaliating after a cheap shot, but to take celebrating a play to some of the levels we have seen just seems unconscionable to me.

I would think it’s a common sense thing, right? Who throws someone else’s shoe? And, who would think to go over some of these situations? Don’t throw a shoe!

I am guessing they MIGHT have told them not to throw someone’s helmet if you end up with it. But shoes?

I wasn’t sure what happened at first when I saw all of the flags come in. I thought, “That wasn’t targeting, was it?” Then, it dawned on me that he’d thrown the shoe. Yikes.

I don’t think he thought anything. That’s the problem.

I would like to think that Coach Pittman will make a video of some of the idiotic actions of athletes doing spur of the moment nonsense and the resulting universal condemnation and criticism it brings. I would show it to the whole squad every week.

I think players see it at the same time you do, on national TV. It’s not like they are hiding under a rock. And, they talk about this stuff the same way you do, complete surprise and they are like the rest of us: what was he thinking? No, he wasn’t. Do they have to make a video and show them? Probably not. They see it. They feel the condemnation of the Florida player.

It is a cultural thing. 50 years ago a duck waddle would be a penalty for unsportsman
behavior but in those 50 years showmanship has overcome old fashioned behavior.
Players on all levels of sports now feel showmanship is okay, in fact, TV was a big factor. Advances in technology change many things.

Sixth grade football, Fall of 1974. It was practice (we didn’t even play games back then, 6th and 7th grade football was just practice 3 days a week, no games, it was to get you prepped for Jr. High and High School football), one guy caught a pass and scored a touchdown, he spiked the ball. I thought the Coach (Coach Robb, he died about a year ago, great man) was going to blow a gasket. He yelled “you guys have been watching too much of the NFL.” Made the whole team run a lot of sprints.

You are right, TV and the Pro game has had a major affect of behavior. 46 years ago the idea of a Jr. High, High School or College player peeing like a dog, throwing a shoe, anything like that, was, well, unthinkable.

I had to run extra on Monday for kissing the homecoming queen and taking a picture a few seconds before the game was over.

We were up 47-0, our starters had been out for over a quarter.

But Coach Keedy didn’t play that, put everybody on the line and then said that “Romeo” was going to run for all.

I was pretty tired after that, but my teammates cheered me on while running.

And that girl, my high school sweetheart, became my wife.

It was worth it. 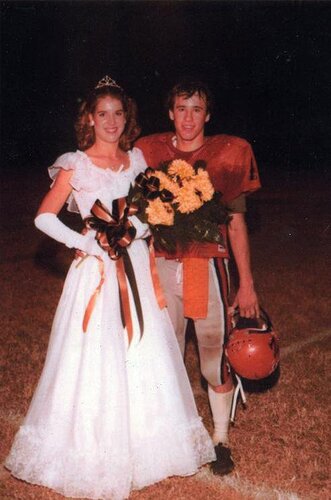 Mostly, coaches don’t treat college players the way fans do. One of the keys to understand that, often they refer to them as “kids.” Maybe there is a hint there. They are young

I teach at a college, and taught at Arkansas for a while when Petrino was there.

When you see them on the field with their pads on, they look like young men. However, if you’re around them enough in just a normal capacity, you realize they’re a lot closer to being kids than men. And the older I get, the more like kids they seem.

The sheer fact that you don’t have 80 kids doing stupid stuff is a testament to how good the leaders are at Arkansas–and how good the kids themselves are.

I don’t think he thought anything. That’s the problem

That’s exactly right. It was a sudden impulsive reaction. It was stupid, but it was completely impulsive. I’ve done impulsive things, too. Most of us have—and generally when we were much younger.

In some ways I feel sorry for the kid. He screwed up, but he’s being crucified for it.

But Coach Keedy didn’t play that, put everybody on the line and then said that “Romeo” was going to run for all.

Coach Keedy was the Paragould High head coach in the Fall of 1974. His attitude toward stuff clearly worked its way down the chain!