Who remembers the Mad Hatters

Who remembers Mad Hatters behind visitors bench at Barnhill basketball games? When was that?

Never saw them in person but clearing remember them from TV and newspaper articles.

I remember them. Was that the football players Eddie Sutton assigned behind the opposing bench? Some originals being Dan Hampton, Jimmy Walker & the likes of those around 77-78.

I believe that was the early Sutton years, pre-Barnhill renovation. They were gone by the time I arrived in 1978.

Why was the Mad Hatter tradition discontinued? Seems that it would be an effective intimidation factor when opposing teams are in town.

One thing that I miss at Walton is the loud band play & the resulting crowd frenzy. That was big part of the excitement & noise level at Barnhill.

Gents it was a long time ago, in my late teens, some things still blurred, lol.

I was a mad hatter. It began in the 74-75 season. In addition to the mad hatters we had a Miller Beer Distributor from Ft. Smith, Mr. Burford - whose daughter, Sissy was a student. Mr. Burford was a major crowd energizer and opposing team disrupter before Jim Robbken.

We were originally the Mad Hatter and Overall Gang.

When they got Barnhill redone the student section was across the court from the team benches, behind press row. The seats behind the benches were reserved for donors, or bluehairs as I heard some students call them. Barnhill was plenty loud without inebriated football players menacing the visitors bench.

I used to try to sit as close to them as I could. Loved the yelling and enthusiasm. I had been used to sitting in an empty cavern with people behind me making fun of me for standing and yelling. This was a nice transition. I think it was Shelby Metcalf who started taking the chairs out to midcourt for timeouts because it was too loud to be heard on the sidelines.

I graduated in 1976 and remember them well. I seem to recall that the conference or other AD’s got us to stop doing that under the threat of retaliation when we were the visitors at their place. Maybe that was the reason all students were moved elsewhere in the Barnhill Renovation.

I also remember they had a constant problem with dust from the sawdust indoor football practice area in Barnhill getting on the court constantly. I think Eddie got that stopped right away when he got there.

Interesting article about the impact of Robbken & the Hog the Wild Band at Sutton’s behest & how the money hungry administrators & marketing have since converted our band at Walton to being the Hog Mild Band - now with disc jockeys & commercials that overpower the band & crowd noise. So much for home field advantage!

Seems that Arkansas could schedule one or two games per season without djs & no commercials & where the fans & bands dictate the atmosphere. I could guarantee those would be sell-out games at Walton. 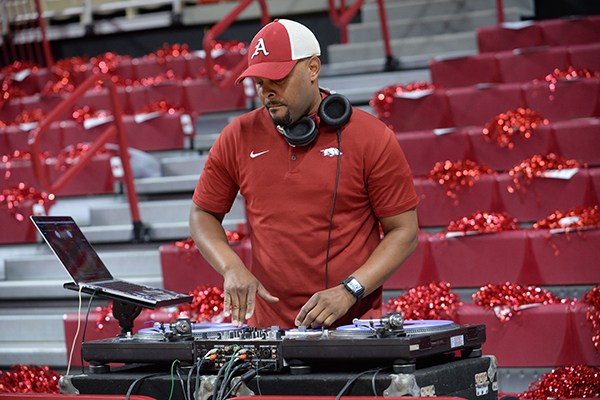 Prior commitments prevented Jim Robken from accepting the invitation to return to Barnhill Arena for Saturday's Red-White basketball game.

Seems that Arkansas could schedule one or two games per season without djs & no commercials & where the fans & bands dictate the atmosphere. I could guarantee those would be sell-out games at Walton.

You really think that would get people off their couch to fill up the arena? It’s not going to work unless those games are with brand name opposition. And even then… we didn’t fill up BWA for Indiana this year, or Georgia Tech last year.

I completely agree that the game atmosphere is no where near what it was. I’ve been gone for several years (couple decades) and have only been back in NWA since last year… I had season tickets at Barnhill for many years and then when they moved to BWA. It was never quite the same but still great, but now it’s nowhere near what it was. It’s still fun but I’m one of the ones that hates to sit there for too long prior to the game and get bombarded with very loud music. I know it’s probably a generational thing.

The only game I’ve been to lately that wasn’t totally dominated by the DJ and silly stunts on the floor was the KY game… the crowd got into it like the old days and simply refused to relinquish control. It was great fun even though we lost the game. It felt like old times - I do think it was the loudest I’ve ever heard the Bud…

I remember one game, I think maybe Abe Lemons and Texas they were heckling the bench so bad that during timeouts Abe moved the players across the floor so he could talk to them . Those were fun times in Barnhill.

You really think that would get people off their couch to fill up the arena? It’s not going to work unless those games are with brand name opposition. And even then… we didn’t fill up BWA for Indiana this year, or Georgia Tech last year.

We had 13k students on campus & a fraction of the current population in NWA when 10k seat Barnhill was a seasonal sellout in a football conference. With 28K students & success & excitement again with Musselman as HC, I would expect Walton would be a sellout. Granted that tv has taken its toll on attendance, but a return to the prior fan frenzy environment, beer sales, & a successful program will bring back the attendance - at least in SEC play.

Avg SEC attendance for Arkansas was 16k (3rd in SEC) in the yr prior to Musselman, so Arkansas was already near sellouts at Walton. A return to the prior format & atmosphere would help.

Well, while better than football, lots of tickets sold that don’t get used, it’s the convenience thang.

Basketball games are similar to football games, unfortunately. Every time out brings somebody on the floor to be recognized or some dumb stunt like shooting a free throw from a lounge chair. It is lame, and I wish it would be stopped, but we know it isn’t going to be. The Hog Wild band could be utilized a lot better, but they are interrupted constantly.

The coolest thing I saw this year was a Chinese juggler. Simply amazing.