Has there been any communication re the game attire for Saturday? White, red, or ???
Wearing Red if no official request.

Stripe out. You can see what your section is wearing at arkansasrazorbacks.com 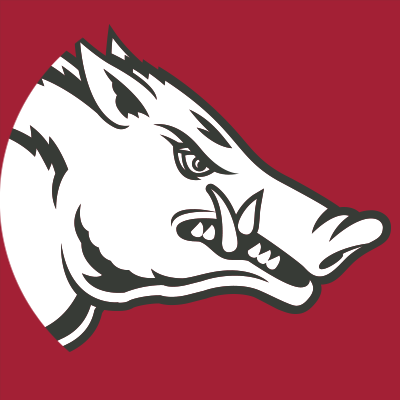 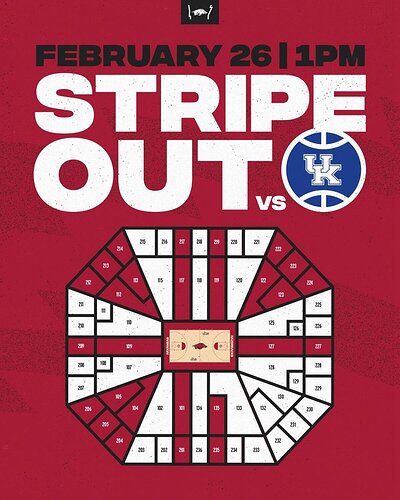 This has been the plan for at least 3 weeks for the Kentucky game. It was made known before the white out and red out. Those were very spur of the moment decisions, like 48 hours before the game

Thanks for the info.

We are almost Out of Outs.

Hopefully! They’ve worn out the whole stripe out deal over the years. It was cute the first hundred or so times.

I have no idea where I will end up sitting on Saturday, so I’ll just wear gray, I guess

Worked out pretty good for the Texas game this year.

True. I wore my grey pullover for that one too and it worked out pretty well. Better do the same.

The white out actually looked better than any of the stripes over the years, I thought. Really looked cool in the arena and on TV

Students are bringing back “sharkansas” too. The Bud will be jumpin’! Go Hogs!

I’m for whatever gets then there and excited but I don’t get it. I’m old.

You have no idea where you are sitting and it’s less than 48 hours before the game? Do you just kind of wing it and plan to get tickets outside?

How many ky fan tickets are allotted to them? Just curious.

Visiting teams normally get maybe 20-30 tickets, sitting right behind their bench and a couple of rows in that same corner. Kentucky fans always manage to get their hands on other tickets though. I would expect them to have a few hundred scattered throughout the building

There were several,100 or so, TN fans last Saturday. I had one sitting next to us, he never said a word or cheered, just set, or stood up there. The 3 or 4 tickets to that side of me have been empty about 40% of the time, and seldom the same people.

UK people have bought season tickets at BWA for years, use them every other year when the Cats come to town and sell the rest on Stubhub. There will be plenty of blue there tomorrow.

When Arkansas fans quit selling out the arena, Kentucky fans did buy season tickets in Bud Walton Arena. I think it’s around 100. Can’t do anything about that. I expect they will have 300 or so there. Many will be in upper deck.

They’ve never had the most of any team as far as all time invasions from opposing fans. The most I ever witnessed was Mike Anderson’s first time to face Missouri after leaving them for the Razorback coaching job. I bet they had at least 25% if not more of the fans that day. Fortunately we won so we got to do the cheering at the end.

Diehard KY fans at the Bud. Good, those are the one’s that get to watch the butt-kicking and hurt the most. They can crawl back to KY and let the rest of them know what is coming down on the horizon.