Where did this soccer game come from to pre-empt the Hogs?!?!?!?

ESPN2 has US on their schedule, not soccer!?!?!?!? We got kicked to the curb to ESPnews!

ESPN is pushing soccer for some reason. It hasn’t really caught on in this country as far as a major sport is concerned, but I think it will eventually.

It is a fun sport to watch in person, but it doesn’t translate to the television screen…kind of like Indy Car Racing. I have been to the Indy 500 twice, and I always tell my friends, it is a sensational sport watching it in person. Television just does not capture the thrill and excitement of Indy racing.

I have tried to like soccer, but I just don’t.

This month, ESPN is covering the European Soccer championships, one of the biggest events in World soccer. It is one of the widely watched events by soccer fans in US.

The game (Denmark vs Finland) was supposed to be over by 2 pm because this is a group game and not a knockout game. That means there no overtimes. So, game was certain to finish on time. Unfortunately, Christian Eriksen of Denmark collapsed during the game, had to be given CPR and then take to the hospital. Game was halted for about 30 minutes and then resumed. That is why it went over. Eriksen almost died.

And ESPN is not pushing soccer. They are catering to the growing soccer following in US. They would not be doing this, if there was no following and they were not getting advertisers. Soccer is never going to replace our major sports and will never come close the following of those major sports. But it is wrong to say it is not sticking, it is growing every year.

This is what happened in that game to make it go over into our time slot. 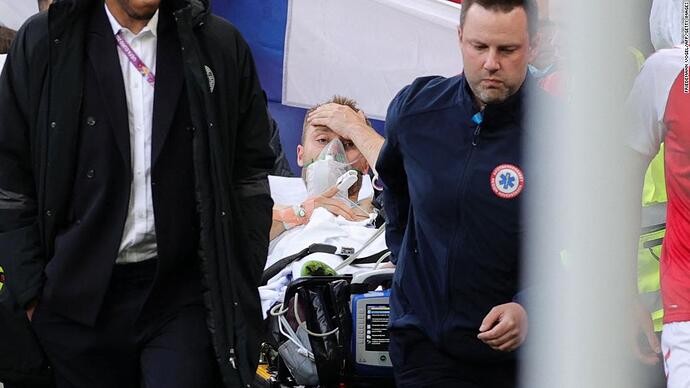 Denmark star Christian Eriksen was reported to be in a stable condition after collapsing during the first half of Denmark's opening Euro 2020 match against Finland in Copenhagen. CNN's Don Riddell has more.

Where was the game being broadcast and why was it moved from there to ESPN2 to fill that gap between the early game and our game? Why would an unscheduled soccer game pre-empt our game?

It was originally scheduled for ESPN. I do not know why it was moved to ESPN2.

But scheduled or unscheduled, they are not going to leave that game for a college baseball game. They did what they do with every event that gets run over. Start on ESPNews,

so why not show the soccer game on ESPNNews?why bump the #1 college baseball team?

The Vandy game ended early. They had 10 minutes or so before our game and this resumption of the soccer game that they had been showing before Eriksen collapsed (closest thing to Hank Gathers that I’ve seen in 30+ years, fortunately not with the same result). I thought they’d kick the soccer match to ESPN News at 2, but they didn’t.

ESPN has other agendas beside viewership, else they would not load us up with softball games when plenty of high profile baseball games were available.

College baseball is not a high viewership deal. It’s all that’s going on in June, or we wouldn’t get nearly as much of it as we do. But about 45 states don’t care about anything outside MLB. Thus you have a 1500 seat ballpark in the nation’s second largest city for a power team (UCLA). The CWS finals in 18 and 19 averaged about 2 million viewers on TV. A dud Final Four game (like Baylor-Houston) gets five times that much, and the championship game gets 10 times that much.

I assume they can easily do regional casts where the ratings would be higher. In any case, NCAA baseball is clearly a higher draw than softball, albeit probably not in huge #'s.

The WCWS last week got about the same kind of viewing numbers the CWS got in 18 and 19, slightly under 2 million.

Regional casts where the ratings would be higher? That makes zero sense. If its getting 2 million nationwide, limiting it to the Southeast, for instance, would keep the total viewers well under a million. Which is not what their advertisers want.

To show where college baseball ranks in the pecking order of national interest, it was made known that after the CWS got behind schedule with rainouts, the game 3 matchup between Arkansas and Oregon St would have been an early Thursday afternoon time slot if it had been pushed back that far. ESPN had Major League Baseball scheduled for that Thursday evening, and it was going to be given priority. The women’s CWS got behind a day, they finished on a Wednesday early afternoon.

Some on this board don’t seem to watch soccer. Ok. Fine. I get it.

But I assure you that if you polled the entire nation to see which had more interest…our super regional or a game in the Euro’s…I assure you our regional would get soundly trounced. There are entire bars in Charleston (pre-pandemic I’ll grant you) where I have sat in a packed situation, watching Euro Cup games all day long.

Its a big deal.

All that said, I would ask you all to pray for Christian. He plays for the Denmark national team, his current club team is Inter Milan…and before that he played for the club I follow. Tottenham. He is a wonderful player…and seems to be a wonderful person. I recorded that match and was watching it unaware after our game…and when it happened I burst into tears. My father died in a similar fashion at age 61 (Dad’s was a stroke and he lived another 6 months…but he was never really. healthy again).

Even in Little Rock, there are bars set up to watch soccer. Hill Station in the Heights area is a good example and they have set it up for the European Championships. I was there yesterday for the opening match and it was packed.

Ratings. No everyone gets ESPN news. More people prefer to watch the soccer game.

Not really related to this thread but I just heard that Eriksen was essentially dead on the field and was resuscitated. Fortunately he seems to be recovering. His career might be over, but at least his life isn’t.

Soccer and CWS Softball get higher rankings and you can charge more for ad buys than non-CWS baseball games.

It;'s that simple and would still be if Notre Dame was No. 1 or UCLA or anybody else.

You can get on various sports web sites and see that college baseball is not a priority to pretty much any of the nationally ran sites. Not just ESPN, but FOX and the other network sites either. Have to dig deep to get to college sports that aren’t football or basketball. Baseball is pretty much in the same level as all other college sports: hockey, wrestling, track, volleyball. Really ESPN does better than the other sports networks covering baseball.

That is correct. I mentioned above he was almost dead,