When defense becomes important, this will change

I have been in minority with skepticism of Chavis at this stage of his career as we appeared one of few if any in SEC who wanted him.

D has given up 500 and just below that last few weeks.

Yes we know we have talent gaps and are young and we need take that into account.

But if you judge off actual D of our head coach and D coordinator last few years, it is hard to understand how important D is emphasized within the program.

Maybe you can simply outscore mountain west at an SMU, but for an SEC program it is striking the lack of recent D success by those at the top.

All said with caveat that we are playing young players of course.

I simply hope we see D as important as top SEC programs. Or we may never be one.

No pressure up front. No coverage on the corners. That’s the essence of what Chavis preaches. Cover man. Pressure with the ends. That is not happening. Of course, it’s youth in those two areas. LaDarrius Bishop had a tough time last night against Walker as the fill-in for injured Montaric Brown.

You are right Clay, so given that he can’t pull that off against SJS and let’s assume due to personnel, what’s his adjustment?

Our personnel can’t be so bad that he can’t dial up a copy of other teams who were more effective against SJS than we were last night. Is Tulsa truly better at D-End and corner than we are? Our due to inexperience, we are that bad at execution?

Just face it…we got out coached and outplayed…simple as that…I hope that there is some soul searching going on right now within the staff and the team. There isn’t any excuse about what happened last night the better team won.

I don’t know about soul searching but lots of talking and tweeting going on. Like this goofy drivel.

Talk less and do more. Let your play do the talking. 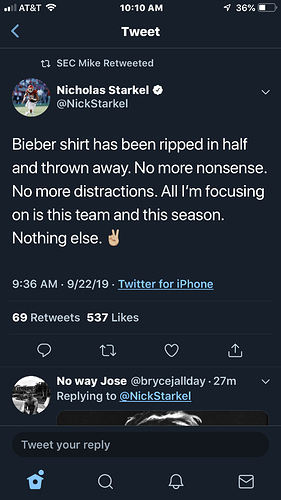 If you watched the player interviews last week, there was definitely Bulletin Board material, one well known player talking about “running it up on these guys” and several talking about aTm in two weeks.

You were off 1 game on your prediction!

Agree about the defence becoming a priority. Add in offensive line to that offense doesn’t get better until we get better talent upfront.