What you say now AB

If you pick Gonzaga now, well…

Anthony, come on down!!

You know where you should go! This is just the beginning. Come and enjoy the party

It would be great for Black to choose the hogs. I think Muss already knows what the young man is going to do! The rest of us will find out Monday.

I think Muss already knows what the young man is going to do!

I agree with you

I think the Zags have been the team to beat all along. Could he still pick Arkansas? Maybe.

Duncanville (Texas) High
On3 Consensus: No. 19

Shaw – Gonzaga was thought to be the favorite at the end of the summer for Anthony Black. Oklahoma State, and more recently Arkansas made runs at Black, but at the end of the day Gonzaga will hold on here. Black cites the winning tradition and the ability to play early with the ball in his hands as draws. The atmosphere at a top-level program with no football is pretty special as well. I set my RPM prediction at 95-percent for Gonzaga.

Tipton – What a long and drawn out this recruitment has been. The two other five stars on this list have decommitted following a coaching change, but not Black. He’s struggled to make up his mind. On the 28th of March, Black will decide between his five finalists – Gonzaga, Arkansas, Oklahoma State, TCU, and the G-League. I’m pretty sure Black was leaning towards each of these options at some point or another. However, as we enter the final stretch, this is ultimately a battle between Gonzaga and Arkansas. While the G-League is on his list, Black won’t be selecting them. The Razorbacks made a last-second push, getting him on an unofficial last month, but the Zags are viewed as the favorite here. 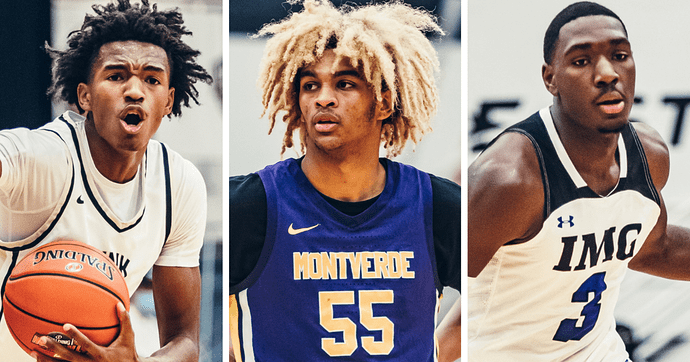 With several recruitments back open due to coaching changes, On3 takes a look at where things now stand with the top uncommitted prospects.

all the national pundits are proclaiming guards neeeded to win it all, time for the contrarian Muss to find his big man is my feeling.

We been following one another for awhile. He got a football offer from the Hogs before he blew up in hoops. We talked bout the football offer back then.

Senor Davenport please hook us up with all the Duncanville football that you can. When Allan Lowry was coaching and recruiting for EOE-A, he hated recruiting but said he was basically assigned to keep the beachead in Allen and not leave except when needed in Austin.Crazy how talent accumulates locally and Duncanville is that most primo spot these days for football, basketball and the combo guys from there.

Yep, my buddy is saying the same.

I’m sticking with Anthony Black to Arkansas. Heck with it. If I’m wrong, then so be it.

What position does AB play in football RD?

Tea leaves all seem to be point to the Zags this AM. Best of luck to AB and on to the portal!

He played WR until he focused on hoops. At the time he received the Arkansas football offer, he had five in football and only one in hoops. That’s what he said in an Aug. 22, 2020 DM.