Oh yes it would.

AFAIK, $250K is as high as it goes. But I don’t think we’d have two stormings in 18 days. I was frankly amazed we didn’t storm after Michael Qualls’ dunk-you-very-much play.

And I would take that W.

If the roles were reversed I think a Ky win at #1 would have lifted us more than beating Aub. JMO

Wonder what they do with that money?

The money goes to an SEC post-graduate scholarship fund. 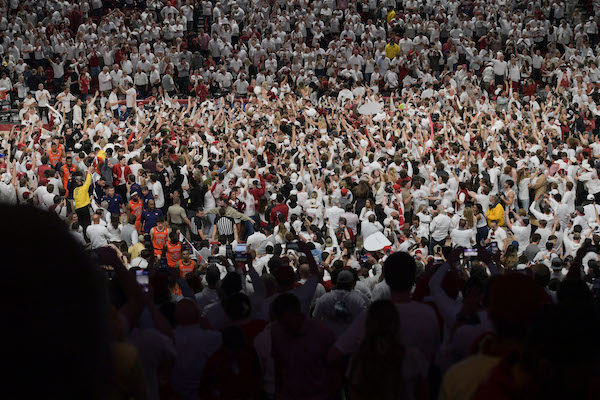 The on-court party after the Arkansas Razorbacks’ 80-76 upset of No. 1 Auburn on Tuesday came with a hefty price tag.

I was frankly amazed we didn’t storm after Michael Qualls’ dunk-you-very-much play.

The big difference between that game and last night was how they ended. Last night, Arkansas got ahead and the students began flooding the aisles several minutes real time before the game ended — not just the aisles around their sections, but in other sections, too.

There were police stationed in front of the student section, but there was no way to stop runners from every aisle.

From personal experience, security was aggressive during that Kentucky game. They were for the LSU football game later that year, too. From what I’ve gathered, Jeff Long did not want to pay the SEC any fines for people on the field/court.

During those years, opposing basketball coaches would get into the media room within minutes of the game ending. Because so many people were in the arena and at the end of the game would be walking up the stairs I needed to go down, I decided to go to the media room during a stoppage in play with about two minutes left in regulation. I set up a tripod and walked back to the tunnel with the camera to watch the end of regulation and OT. I wanted to have it for a potential celebration video.

When the game was over, I began to make my way toward the floor to record. A UAPD held me back. I showed him my credential and he didn’t budge. So we didn’t have any video from that one.

Having been on the field for LSU (our seats were next to the student section), security was not very aggressive at all. There were a couple of ushers, no cops, and they weren’t trying to stop anyone, at least by the time my son and I got down to the rail.

If the roles were reversed I think a Ky win at #1 would have lifted us more than beating Aub.

While I agree, generally, Aubie had 19 consecutive wins…it’s really nice to have been the team to mess that up.

I seem to remember seeing some initial pushback from security that night, but that was a long time ago and I was watching from a long way away.

KY could very well be No. 1 when we play them and The Bud will be even louder. When we win and storm the court, the SEC should pay us $250,000 for upgrading the SEC image.