What was the real attendance yesterday?

40,000 people…That is my guesstimate. It is probably not real close, but it is the smallest crowd I remember in many years, not counting the crowds at games with horrible weather in Fayetteville or Little Rock. It was a nice day with temperatures around 65. I stayed until the start of the 4th quarter because it was so nice. We are playing Auburn with Gus Malzahn on a beautiful October day and we get 40,000 people to come watch the Razorbacks.

We have got to start winning games if we want to fill Razorback Stadium.

I would have guessed 35K in the stands.

Students being on a 4 day Fall Break & campus being closed may have contributed to the low attendance. Makes no sense why UofA scheduled Fall Break during a home game weekend.

We don’t ever know how many are there. You can’t see inside the suites. I did go to a couple of suites in pre-game and they were packed. I’m sure not all of them were, but that’s an area where the seats generally get used.

I thought at casual glance that there were about 40,000 there. Auburn didn’t come close to filling their section, either. It just seems that teams don’t travel with their teams the way they once did and that’s probably because of such good TV setups in homes. When you can watch a game with all the replays and a 4k screen that can be 60 inches, it’s easy to stay home. I know it looks pretty good on my TV, too.

And the auburn section was about 15% full. the last time I attended an auburn game in Fayetteville was during the petrino era, and their section was PACKED!

of course, back then both teams were good and the games were fun.

As they ran trough the A 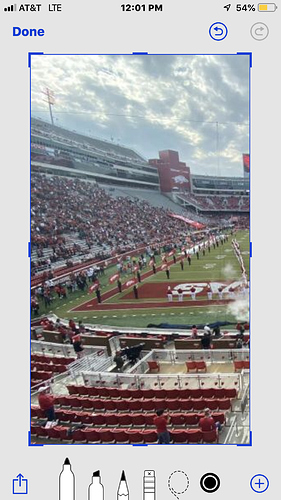 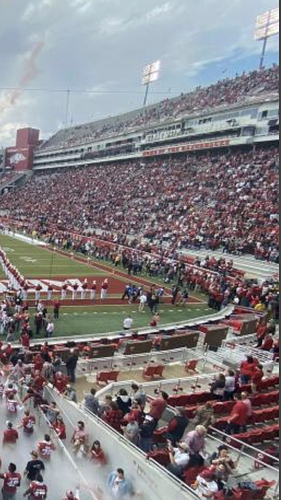 Ya I’m with you on the 35k at most. I think it was less than half full.

Aloha,
According to my UA daughter the campus emptied out big time Friday due to Fall Break. Students returning Tuesday PM.
In the future, I recommend for the UA to ask the SEC to schedule the Hogs a road game during UA Fall Break.
Makes no sense to have a home game and bring in recruits when the students are out of town.

I believe that’s a state thing, not a university thing.

Like Clay said, it appeared the skyboxes were pretty full - no doubt in part because it is like being at home with the TV, food, etc.

Taking a photo of those outside in the stands is just part of the picture, not the full one.

Those who came and supported the team should be praised.

Those who didn’t show up of the 54,000-plus tickets that were distributed should not be criticized, but also should not have as much say in changes as those who did.

Teams play on breaks all the time. The basketball team plays half its nonconference schedule and the first part of conference during the Christmas break. Student seating is sold at a discount to the general public some of those games. I’m pretty sure I’ve seen baseball play two SEC series on spring break before.

The attendance problem yesterday had less to do with fall break and more to do with the product on the field. I spoke to a friend yesterday who said he had two good tickets that he tried to give away and no one wanted them. A lot of people don’t want to pay, even if it’s just for gas and a lunch, to watch bad football.

TV has hurt attendance across the board but people will still pay to watch even average football teams, especially if they believe they can be competitive. The 2014-16 seasons at Arkansas proved that.

Agreed. If the Razorbacks were 6-0, the place would have likely been near packed and the game would have been 2:30 p.m. one.

Quality of play is a consideration, but being on campus & live football always fun to be there for alumni during great weather. Found that many students at games do not watch the game as it is primarily a big social event.

Night games seem to have better attendance, especially early in the season. With most of the 28k students away from campus, most & their visiting families (including my son & our family), were not at the game. Hope TV revenues offset some of the lost attendance $. No doubt local hotels & restaurant businesses are feeling the pinch.

Yeah, probably in the 45,000 range, I sit in the NEZ and looked earlier in the week to see if they had sold any of the seats that weren’t sold as season tickets, to my surprise, they had. Now, I don’t think I saw anyone in those seats, lol. I know they sold some, because my son’s friends wanted to be in the same section as he was, and I only had two extra. A mom bought 2 from the UofA on Wednesday.

Do the students even show up anymore? Last year when I came out for a game it wasn’t any kind of break but the student section was about 1/3 full. My niece and her friends went but left before halftime

Worst attendance I’ve ever seen remains the Weber State game in 2001, scheduled on the fly after 9/11 with a no-name team and the Hogs seemingly in freefall. Definitely fewer people there than I saw on the video yesterday.

That was my 19 y.o. first hog game. It was the week before his first day. We arrived a little before halftime, sat down on first row instead of my regular seats. He was wide- eyed watching the band perform, and sound asleep 5 minutes into the 3rd quarter.