What the SEC said about the backward spike 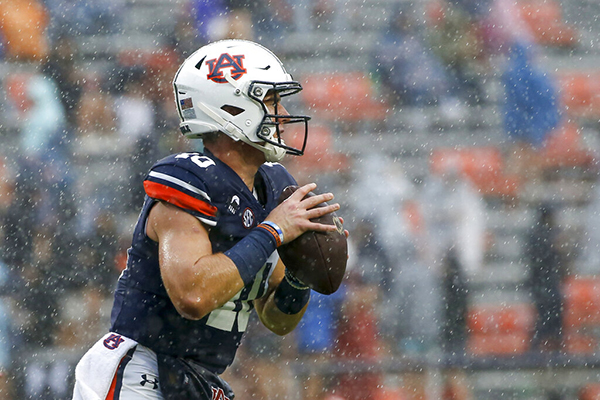 A controversial ruling by referee Jason Autrey was the difference in No. 13 Auburn escaping with a 30-28 victory over Arkansas on Saturday at Jordan-Hare Stadium.

Man, I was screaming as soon as it hit the ground to jump on it.

Whatever, we’re trending up while a lot of teams seem to be going the other way.

Everybody knows if was a fumble with Arkansas recovering. The SEC office has very little credibility. Does anybody believe Alabama would have gotten the same ruling as Arkansas did? This conference reminds me of the NBA. They tailor the rules to fit the situation.

Officiating error SEC should recognize at the least.

Cost one team the game.

That is total BS SEC is just covering for refs. Does anyone really think same ruling would have been applied had it been Alabama, Of courses not . Same old discrimination I would say move to another conference but they are all worse than SEC!

The real bottom line with the position of the SEC office comes down to Arkansas did recovery the ball! So if that’s really fact they screwed the hogs knowing what happened.

That will teach the Hogs… move faster to recover the ball rolling around on the ground if you want possession.

I would rather the corrupt SEC to say yes we screwed you and for you to continue to get this big money, you need to understand that the trade off is we will do what we want, when we want, fairness be damned. At least it would be honest.

Well, one nice thing is that the larger football community seems to really be behind us on this. The overwhelming response is that we got hosed. I do take some solace in that.

I can’t think of a single instance when a conference has reversed a call and the outcome of a game after the fact. And there have been doozies over the years. (Ask Missouri fans about the fifth down game) There just isn’t a remedy for this sort of thing, and I can’t think of one that would be satisfactory. We can’t say that we know what would have happened had the officials not blown that play dead. Could #11 for Auburn have recovered the ball instead? Possibly. He seemed to react to the whistle. Would #3 have tried harder to keep Foucha off the ball? Almost certainly. Or maybe Zach Williams would have fallen on the ball instead (he also plays to the whistle, but might have had a shot at it otherwise). Can’t reverse the call on the field and punish Auburn for playing to the whistle. And if they did recover the ball, would the field goal have been made? Just don’t know. So this is a thing we have to live with.
And blowing the whistle was the chief error the officials made. Once the whistle blows, nothing that happens afterward counts for anything, and it renders replay reviews useless. We see this a lot, and referees just need to stop blowing whistles on loose balls where there is doubt about whether the ball is live or dead, period.
One thing I do know, I would rather be an Arkansas fan than an Auburn fan today. These are programs moving in different directions.

They recovered it as fast as they could get to it. The un-ref had already blown the whistle because of total lack of awareness and knowledge of football, therefor, in accordance with the SEC directive to always favor the big dogs, they had an out to give it to Auburn.

Foucha was immediately pursuing the fumble. He just started from well behind the line of scrimmage.

There is no excuse. I want the SEC office to justify what constitutes “immediate recovery,” 1 second, 2 seconds, 3 seconds, 10 seconds? How many seconds does it take before a fumble is no longer considered a fumble?

There was a clear recovery by Arkansas. The word immediate and video evidence of the recovery and the information from officials on the field all point to 1 fact the SEC wanted Auburn to win and they took care of it! Just like many other games they have screwed the hogs.

What I take away from all of this are two things:

If no whistle and Auburn recovered the ball, I don’t believe they could have 1) Realized it was really a fumble 2) Gotten their field goal team on the field before the clock ran out. It was such an odd situation. Everyone expected that the play would be dead when QB spiked the ball, so in anticipation of that, would any of the players realized what had happened? Would the officials have realized that they had to rush to get the ball from the Auburn recovery to prepare for the next snap? Mute point if Arkansas recovered. Clock would have stopped for the change of possession, but would have been an easy knee or just let it run when started. I think the officials were focusing more on the fumbled snap, then clocking ball, than on the direction of the spike. And, I’m not sure whether the official who reviewed consulted with his on-the-field team before announcing the decision. Did they discuss at length the possibility that it was a continuance of play? Lots of questions, but only one outcome.

Since this is spilled milk, I know a waste of time, but if this ruling was a fumble, but the ball being blown dead, means no change in possession, should there have been a continuous running of the clock?

Had there been an Auburn recovery and the call on the field was backward pass, I suspect you would have also had a booth review, because the turn of events was so bizarre. After the review, and I assume the FG team would have time to be in place, how much time is on the clock? 27 seconds? 3 seconds? I’m not sure.
Why isn’t there more transparency regarding replay review in general? A recording of the replay official’s ruling to the on-field referee, for instance? A different sport, but I’ve seen televised rugby matches where you hear the conversation between replay officials and the on-field official during the broadcast as it happens. It’s great.