What Sam Pittman said tonight on his radio show 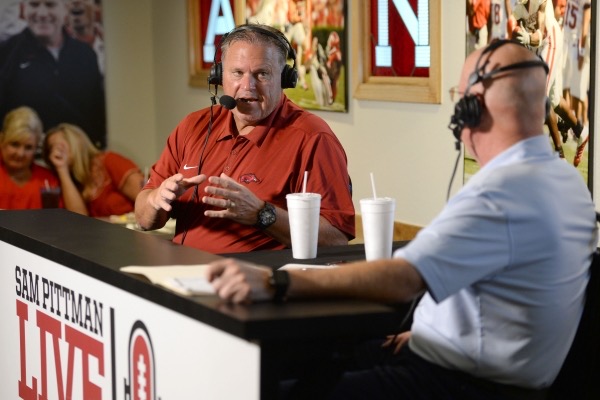 What Sam Pittman said during his first preseason radio show

I didn’t take what Pittman said last night to be a dig at the previous strength coach so much as an acknowledgement of how the last offseason hurt their strength training. The offseason between the 2020 and 2021 seasons was night and day different from last year for the players.

I was covering an Arkansas baseball series the day of the 2018 spring game in Little Rock, so I watched the spring game on TV. Once Arkansas’ was over, SEC Network cut to the spring game at Auburn and it was a jarring difference in the way the teams looked. That of course was shown when those teams played, as well as when Morris’ teams played other physical teams like Alabama, LSU and Mississippi State.

I also think Arkansas has had an interesting assortment of coaches who have had a different idea of how players should look at certain positions. Bobby Petrino to Bret Bielema to Chad Morris to Sam Pittman was a roller coaster of ideologies. I think all of the strength coaches have executed the head coach’s vision.

Very good comments, Matt. It reminds me of 2008, Petrino’s first team. I happened to be friends with an attorney who happened to be the agent for both Petrino and Saban. At the game against Bama that year he texted me from down on the field that the difference between the Bama players and ours was staggering. His words were “I’m afraid the Hogs are way overmatched”. Of course he was right…

I also think Arkansas has had an interesting assortment of coaches who have had a different idea of how players should look at certain positions. Bobby Petrino to Bret Bielema to Chad Morris to Sam Pittman was a roller coaster of ideologies. I think all of the strength coaches have executed the head coach’s vision.

Yea, that’s kinda my point. What is that every coach thinks the line isn’t what it needs to be. It begs the question, is THIS line, the one we need? I’m not knocking anyone, just bringing up an interesting observation.

Chad Morris and Dustin Fry wanted lean linemen who could run. I think both used the term “flat bellies” to describe their linemen. Beaux Limmer and Ricky Stromberg came into the program probably quite a bit lighter than incoming linemen at other SEC programs, including the ones recruited by Sam Pittman at Georgia. I think they were 270 when they arrived. Compare that to a couple of Georgia freshmen who I think were in the 320s or 330s by the first game last year. Weight isn’t everything, obviously, but I think it’s a key piece for a lineman.

Pittman has said he wants “big people” along the lines. He has a different belief set than Morris did, that the teams that win in the SEC need to be heavy along the offensive line. Bret Bielema had the same belief, which is a reason why Pittman was hired to be his line coach.

I think like Pittman in that bigger wins more often than not. Houston Nutt’s best teams had big offensive lines blocking for Talley, Cobbs, McFadden and Jones. The 2010 and 2011 teams under Bobby Petrino were the same way, and Bielema’s best year came with a strong collection of big linemen coached by Pittman.