Cliff notes: Dominique Johnson might get to play and it is too soon to know about Jalen Catalon or Myles Slusher. 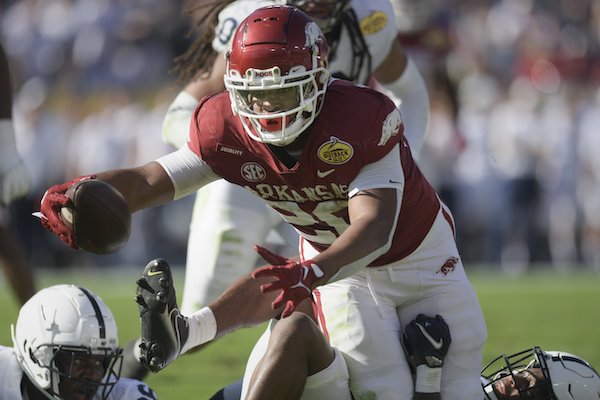 Injury report: Johnson might return, no word on DBs for South Carolina game

Arkansas running back Dominique Johnson will increase his workload early in practice this week to determine if he can play for the 19th-ranked Razorbacks against South Carolina on Saturday.

I wish Catalon could stay healthy. We are a different team when he is in there. Hope it’s nothing.

It is a shame Cat cannot stay healthy. When he is healthy, he is the best football player we have had at Arkansas since Darrren.

It is a shame Cat cannot stay healthy.

I’m thinking this is the kind of “injury” he’s going to have to learn how to play through; suspecting his shoulder will be sore the remainder of his days.

Exactly what was the injury to D Johnson’s knee?

Believe it was an ACL.

Cat has an injury to his wrist/hand, MRI was not bad, but not good either. I don’t think he’ll play against USCe, will depend on his pain tolerance. He’ll be back against aTm for sure. Slusher won’t play this week.

Cat has an injury to his wrist/hand, MRI was not bad, but not good either.

Thanks, but “Hmm”. If not broken, I’d play him this weekend and let him rest next week. Perhaps, have him available to play this weekend, but I’d start him if there was any chance he could play – assuming not broken. Slusher, not playing this w/d because of the duration of concussion protocol, or something else?

Gosh, if he could play this week instead of against Missouri State, I’m guessing that’s what they will do. That doesn’t take a lot of thinking.

That doesn’t take a lot of thinking.

True dat. I was trying to distinguish between soreness and injury.

I wish we kinew what MRI not bad but not good means…but that’s more info than I have heard elsewhere. I have read its wrist/hand all day on other boards. But “MRI not bad” but “not good” tells me maybe its a hairline fracture or something? Speculating…Glad its not a “bad” injury though. That is a relief.