What’s the highest rated basketball class UA has ever had?

I think the class after the NC that blew up with Adebayo, Pate, etc., was the highest rated. Seems like it was #1 in a couple of rankings.

People my age remember when there were no ranking. The first time I remembeer the Hogs basketball being highly regarded was in the 40’s when they had the team that was involved in the vehicle accident and at least one player killed and they I think did not play in the much smaller NCAA tourney that year.

Actually the NIT was maybe a bigger tourney than the NCAA.

That #1 class was headed by McDonalds AA Derek Hood and at the bottom of class was Pat Bradley, who in today’s rating system probably would have “NR” against his name.

Yeah that’s what I thought. It was too late to capitalize much on the NC for the '94 class but we raked them in for '95, especially with Corliss and Scotty both leaving early.

The 94 class did get Kareem Reid, but he had to delay a year because of academic issues. Think about if he could have been on the 95 team as a backup to Beck, McDaniel, and Dillard. They also came down to the wire with Jelani Gardner, a Top 20 player from California, who wound up choosing Cal. It didn’t seem impossible to get Gardner, the Hogs had gotten Darnell Robinson from California the year before. The Hogs definitely had recruiting power back then. Gardner had just played in the McDonald’s All American game the day before the national championship game, and after Arkansas won he made his choice a couple of days later. Arkansas felt really good about it’s chances, but Gardner was quoted as saying he didn’t want to be on a team that was similar to the McDonald’s team, and have to share minutes with many others. He wanted to be the man, and California promised him that.

I believe Arkansas thought they would also sign Jerod Ward out of Jackson, Mississippi but he chose Michigan probably for the same reasons.

All of that is true, and I have always said that if Kareem could have played in 95, we would have won back to back championships.

The NCAA did not tear it apart. Frank tore it apart. The UA self imposed penalties as part of its own willingness to take the hit on a weak investigation that turned up as nothing happened wrong. Nolan had to turn Adebayo and Pate loose. Adebayo later was ruled able to return and given a rare extra year to play. Pate had signed to play professionally almost immediately and could not return. This ordeal soured Nolan. No doubt it was the root of some problems that bubbled out later. Marcus Saxon did not make it to school because of questions about his transcript, but he did play elsewhere with no problem.

That class also had Kareem Poole, a big, gifted high school player who did not meet NCAA eligibility standards.

Thanks for the clarification, Clay. Regardless of who was to blame, Coach Richardson had done nothing wrong. Small consolation. The damage had already been done.

You are thinking about Kareem Reid. He signed the previous year and sat out because of Prop 48 rules.

Kareem Poole WAS actually a part of that class. He was a big, and a very skilled one. That class was absolutely loaded.

Pate and Saxon were 2 of the most highly rated Juco kids in the country and spent the summer at West-Ark trying to complete their eligibility.Joel Stubblefield was the head man at West-Ark and didnt like the fact they were "Arkansas"using his school as a stepping stone to get into UA.He wanted West-Ark to be the Harvard of JCs.which wasnt the point of Jucos and he and I battled over this many times…Anyway,Jesse Pate got eligible and Marcus Saxon didnt and ended up at Utah St.and had a fabulous career MVP of the conference his senior year.Marcus was a good kid and a pretty good student and we never figured out how he didnt get in to Arkansas and Jesse did? Jesse did play a few games at Arkansas and then he and Sunday were ruled ineligible. So that`s what happened to that number 1 class.Not sure it was all on Frank that tore up that class as there were several people that were complicit in tearing it apart and that started the downward spiral that has been with us until the hiring of CEM—HOPEFULLY

He was buried in a No. 4 Razorback jersey 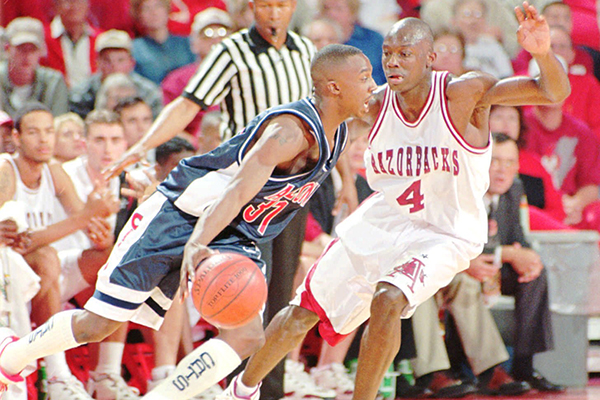 Pate was the fourth-leading career scorer at Murrah High School.

Yes, Poole and Saxon never made it to Arkansas

That is incredibly sad, Dudley. I had no idea Jesse had passed. He was sure fun to watch and such a natural scorer. Still makes me sick the way that recruiting class was decimated.