What kind of player is Notae

I hear good things about him…What are his strengths?

JD is a combo guard - more of scorer than distributor - that averaged 15.5 points, 6.2 rebounds and 3.4 assists per game last season with a high of 40 points against Florida Memorial.

Looks solid in the few practices I have seen and they rave about him.

Those are certainly good numbers. I hope he is working hard on his FT shooting though. A guy who will be handling the ball a lot in crunch time needs to be an 80% + FT shooter.

One would assume he is.

Thanks Dudley… he looks to be a very solid edition to our team, will be very interesting to see how Muss works in all this added Talent.

is he a spot up shooter or can he drive to the hole? good ball handler?

He’s a scorer, pretty good handles, will be a tenacious defender.

Just watched 2-3 minutes of the highlight video Biff posted and the U of A “comp” that came to mind was Patrick Beverley. Not saying he has the “Dawg” in him that PB does…but he just reminded me of Beverley.

If he is some semblance of that, we’ll all be happy.

If you missed it, I talked to a couple of Jacksonville basketball writers this summer who covered Notae and got their insights: 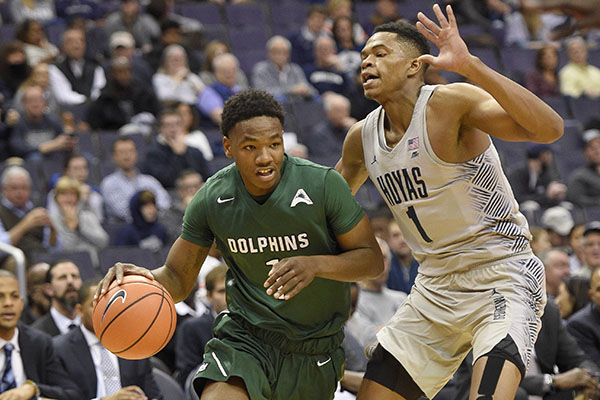 The article says a key weakness was “turnover prone”. Well, he’s having a year to think about that, while watching Muss’s team lead the SEC in low turnovers.

Well, he’s having a year to think about that,

Also has a year to work on it in practice, doing things the Muss way.

Will he be better than Harris next year? I can’t imagine that there will be minutes for both next year unless we lose Joe and/or Jones to the NBA/professional ranks.

Going to be incredibly interesting to see how all these guards get playing time. Very good problem to have but one that’s going to be tough to do considering CEM only likes to play seven or eight players

In hearing CEM speak it appears it all has to do with trust when it comes to playing time. Can he trust you to play defense, rebound, hustle, not commit silly fouls, rebound etc. It seems as though the bench is somewhat shortened this year due to that. Last couple of games you have seen more PT for Chaney due to CEM’s trust level going up. Guess we will see but a good problem to have!

I found your post interesting and makes me curious, with one year under his belt and time to develop knowledge and trust with players, will it increase the rotation? Muss was pretty effective with his rotation with TCU, doing a great job of pushing the right buttons to compensate for Joe’s absence. I don’t relish the thought of having to repeat this very often.

I went to a practice in the fall and Notae was very aggressive going to the basket that day. Continually got to the rim. Small sample size but probably the 2nd most active scorer behind Joe during the scrimmage portion of practice that day.

Agree will be fascinating to see how Muss handles him vs the freshman as far as playing time.