What is the difference between Kopps abd Ramage

I’m trying to figure out the difference between the two because both throw a pitch whatever they want to call it that is a 12 to 6 breaker that breaks below the knees if thrown correctly, but they get Dramatically different results.
The best I can tell is that Kopp’s pitch looks more like a fastball until it gets right at the plate and then the bottom falls out.Ramage pitch breaks a lot more but he either leave it in the heart of the plate(a lot) or it goes in the dirt.
We would be in great shape if Ramage would learn to throw the pitch that Kopps is throwing.

Kopps throws a cutter, which moves laterally toward his glove side rather than up/down. So it moves outside the strike zone to many hitters who swing anyway. Cutter is short for cut fastball, by the way. Mariano Rivera rode it all the way to the Hall of Fame. Apparently Kopps has a couple of cutter variations. Also apparently not everyone can throw a cutter, or a lot more people would be copying Rivera.

Ramage’s Perfect Game profile from high school says he throws an 11/5 curveball, which breaks sharper down than a slider. Of course that’s four years old and he may have a new pitch. After the UALR game recently, DVH said Ramage had a good fastball and curve but his slider was a little off. 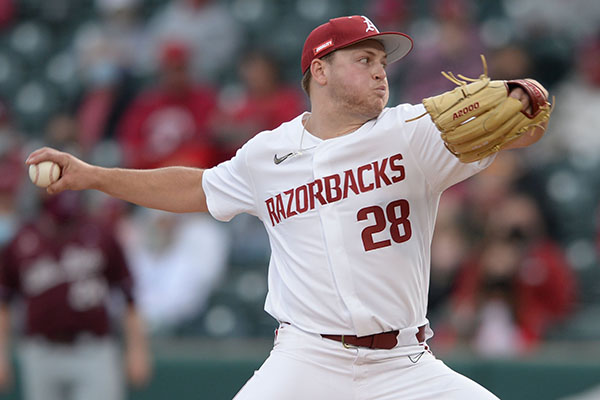 For Arkansas pitcher Kole Ramage, his second outing against UALR went a lot better than the first.

Kopps pitch looks like the bottom falls out of it,Ramage pitch is a lot more visible to the hitter in the air,Kopps pitch gets right on top of them and dissappears.Rivera pitch looked to me like it moved 6-8 laterally but I don’t see that with Kopps but like you say he throws 2 -3 different type pitches.

The difference is that Kopps also throws three other pitches - all for strikes. Ramage does not. Hitters can take the cutter Ramage throws out of the zone.

Ramage (and Kopps) was good enough to pitch in the CWS a few years ago.

Hopefully, he will be able to fix what ever is causing his struggles in his next few outings. Tonight will be a good time to get it going.

Throwing strikes is the key

Kopps had to get back to his roots. He did it better than ever. Instead of chasing velocity.