When you mentioned Notae it’s obvious without him at MS State the hogs were lost without much of a fight. Yesterday without Notae on the floor the hogs were out of synch. Once he entered after the timeout around the 10 minute mark the comeback was on and the energizer bunny was back.

Yesterday without Notae on the floor the hogs were out of synch. Once he entered after the timeout around the 10 minute mark the comeback was on and the energizer bunny was back.

I agree with that in the 2nd half. But, I was also happy that when Notae went out with 2 fouls, with 6 or 7 minutes left in the first half, the team played really well and held their own until half-time. That good play while Notae was sitting was really important. Earlier in the season, if that had happened, we probably would have been down double digits at half-time, with little chance of coming back.

I think this team can (will?) make the NCAAT.

I’m still on the fence, although besting LSU down there was huge. We are still on the below side of 500 and our toughest games are before us. I think it’ll be quite a challenge to finish better than 9-9…suspecting the Vandy loss will haunt us.

That Vandy loss is a blunder that could be the difference in the dance and the NIT. Getting to 9-9 is still within reach but the Higs can’t get beat by the bottom half of the league any more.
The hogs will also need a few more
Q-1 wins.

The Hogs control their own destiny. There are a lot of tier 1 games left. Win 2-3 of the tier 1 games and don’t lose any 3rd or 4th tier games they should be Ok. If the Hogs can continue to play as well as they did last week, the talk will switch and be all about seeding and potential opponents.

Getting to 9-9 is still within reach

If we play like we did this week there’s about 2 losses left on the schedule.

If we play like we did this week there’s about 2 losses left on the schedule.

We have to quit turning the ball over. Maybe we can overcome our three point shooting woes. But that many turnovers will cost us a lot of games.

I agree. Turnovers and quick 3s are killing us.

As long as our defense is good, a few quick 3’s I can live with. Some might actually go in. But 2,3,4 TO’s in a row just shouldn’t happen.

Our D held LSU to like 4 points in final 9 minutes of second half.

We can play D.

I agree with most these points, but JW is not athletic enough for the NBA. Still he could become a great college player and there’s no shame in that.

JD is going to be a player who isn’t fully appreciated until he’s gone. I think him not picking up a fifth foul over the final 9 minutes of the game, the way he attacked LSU’s switch-everything defense and his drive-and-kick assists in the second half speak well of his basketball IQ. He’s been outstanding in SEC games and the numbers show it: 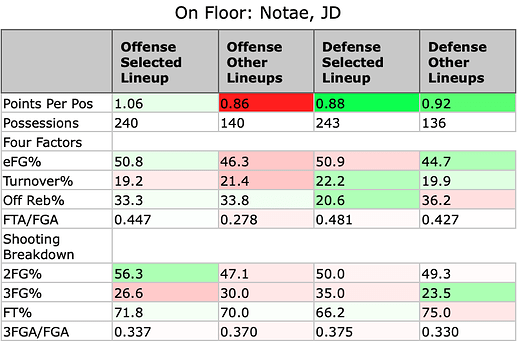 That’s a very interesting chart. When JD is in there, eFG is up, turnovers down, FTA ratio up, 2FG% up, PPP way up. Not to mention the D gets better when he’s on the floor in several ways, especially defensive rebounding and turnovers forced, although that’s more of a mixed bag.

It’s almost like he’s a terrific player or something.

I almost posted this comparison the other day, Mason Jones meant so much to Muss’ first team, Notae means about as much to this team as what Jones did. The biggest difference is that Notae has better players around him than what Mason Jones had to work with. I really think all that does is hide Notae’s contributions a little more. . . He is the engine that makes everything go. . .

I have little doubt this is an NCAA team, Muss knows how to get them there and has consistently proven that his teams are NCAA bound. Now that said, the smidge of doubt I have is related to how much Muss’ injury time plays into things. . . . The next couple of weeks will tell us a lot. First test passed in that regard but still concerned.

Scottie always brings value to the discussion. I am amazed sitting by him at football games. I wish I could say we think alike but that would be unfair to him. He thinks better than me. Ha. I love this kind of analytics.

I once sat beside a man at basketball game that would produce amazing stuff on a blank piece of paper. Bill Connors, my boss, counted what he thought were good shots for the team’s best player and his touches and where they were. I noticed this first when we were sitting beside him for an OU-Kansas game with Wayman Tisdale playing. He showed me not only the number of touches Tisdale had but where they were and had another sheet that showed where his shots came. Touches were as important as shots. No one else was producing anything like this. It was his own analytics and helped him write his columns.

When JD is in there, eFG is up, turnovers down, FTA ratio up, 2FG% up, PPP way up. Not to mention the D gets better when he’s on the floor in several ways

Also, speaks to the quality of the bench.

Probably the best all-round guard in the conference. Name another conference guard that’s better on both ends of the court than JD.