What did Yurachek say at TD Club?

He totally supported the coach and his staff.

This is a brief on it. There will be some more coming later. 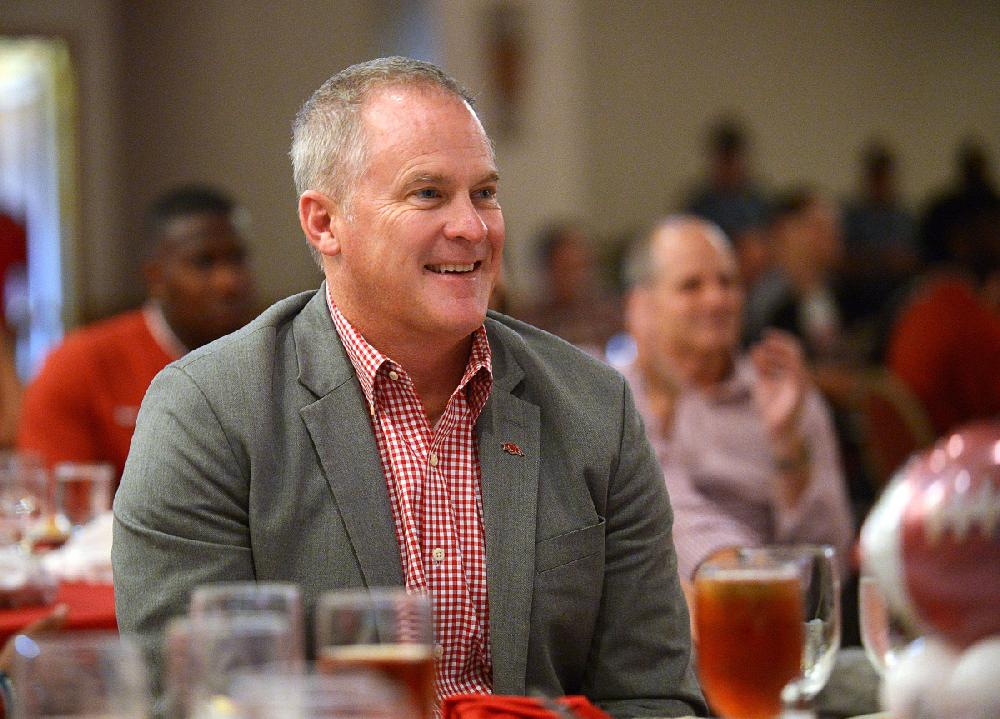 In an appearance at the Little Rock Touchdown Club on Monday, Hunter Yurachek said the Razorbacks “took a step backward” in its loss to San Jose State.

At this time, Yurachek has to offer support or this year will really get bad.

Getting Burks back this week will help Starkel with the passing game and that should prevent A&M from putting 8 or 9 in the box. The players will have to be focused and avoid mistakes to have even a small chance to win.

The defense can not continue to allow our opponents chunk plays. Blown coverages happened frequently and poor angles were taken by d backs.

Last week, we saw the worst of this team. We definitely need their best this week or we will be embarrassed again.

He totally supported the coach and his staff.

That is all any AD would say at this juncture. What else could he say? Don’t most of us expect Coach Morris to be here at least through year 3? We should just support our Hogs and hope to see improvement through the remainder of this season.

He does need to have this team ready to play each week. They better be ready or they will be embarrassed. If they quit on him or continue to show up not ready to play, then all bets are off, but I expect us to have a chance to win a couple of SEC games…Kentucky and Mississippi State. We can’t just give up…we’ve only played 1 conference game.

Our offense looked pretty explosive against Portland State. Starkel looked really good. If we bring that and get a couple of turnovers against somebody, we could get a win. With Starkel, Boyd, Burks, Knox, Woods, and O’Grady, we have some firepower. Coach Chavis is going to have to pull something out of somewhere to get this defense to play a couple of decent games…if he can and the offense plays to its potential…we could win an SEC game or two. Maybe.

We aren’t firing Chad Morris, so we just need to do what we can to help the team. I don’t know what that is besides just show up and support them. That is all we can do. We don’t want to ruin any recruiting success we might have by acting stupid. Morris has shown he can recruit, even if he hasn’t shown much else. Let him do that. Maybe he can turn this deal around. We should know by the end of year 3 if he is capable of doing this.

when the AD offers his support to the coach and his staff, that’s usually the kiss of death.

for those worried about a buyout preventing us from firing morris, i just have to ask if letting him go and elevating an assistant to be interim coach could possibly be any more embarrassing on the field than what we have witnessed so far with morris at the helm? Wouldn’t cost a dime more to do just that and it would send a message to the team that poor effort and failure will not be tolerated. I’m not sure our recruiting could get worse at this point. that would be the only factor in question. what’s worse for recruiting, having a HC with interim label or getting blown out by the likes of San Jose State?

I examine speech very often(part of my previous job and part of the new job I’m training for now). And I didn’t see anything in his mannerisms or tone that suggests he wasn’t sincere about what he was saying. This wasn’t AD talk, he’d have to be a tremendous liar(like Ted Bundy liar) to pull off just giving AD speech like what I saw today.

I agree, General. Watching the video now it appears AD very sincere in his comments.

when the AD offers his support to the coach and his staff, that’s usually the kiss of death.

If the AD has to come out and say he supports the coach, then something is wrong for sure! The barn is definitely on fire!

So last year he strategically schedules his LR Touchdown club appearance to be after perceived cupcake N. Texas. Ouch!

This year he schedules after MWC doormat San Jose Tech.

Borrowing from my legal eagle friend.

What else is he supposed to say in that situation? Morris is the coach at least through this season, and more than likely next season too. By the end of his time here, he’s more likely to add better talent, but not looking for any major success.

He responded to a direct question. He didn’t just volunteer some cliche’ about “supporting the coach.”.

I can’t say I came away feeling great about the program, but I did come away thinking HY knows we’d be foolish to change coaches now or even at the end of the year. I agree with that. CCM might not be the right coach. Certainly I can’t point to anything to prove he is, but if we want a chance to succeed as a program, we have to support this coach until he’s had a reasonable chance to turn it around. (And, no, I’m not defending how ill-prepared we were last week. Just saying we have no better options. “Fire the coach yesterday” might make someone feel good, but it’s a terrible strategy.)

Most times when an AD says he supports the coach, he or she has been asked a question from the media, as in this case. And whether you like it or not, this team is in disarray. Whether you, I, or 2 million other average fans support the coach won’t matter. What will matter is if the BOT and the power brokers support this coach. I don’t remember them calling either of us asking if they should hire him nor will they call us if they want to fire him. CCM has been able to sell the opportunity to recruits for early PT. If he continues to fail to win games, then they think he just doesn’t know what he’s doing. When you get to that point, the only thing that can save the program is the AD has to fire the coach and sell the message that the UA’s expectation is to succeed at a high level and the past performance just wasn’t acceptable.

And the only thing I think HY should have added is that we need the Razorback Fans, although understandably disappointed, to help see us thru this PROCESS. In all honesty, 3 wins is probably where we will end up now, and in all reality that is not progress. Cannot see us getting a SEC win this season either. And after looking at the Texas A and M schedule, they are going to be ready to play and I am hoping we stay within 30 points. But I would not bet on that.

He also said that he got as many emails in support of our program as the negative ones.

Only chance I see for us to win would be no sacks if that’s the case it will be a win for the O-line and the program no matter the score. I’m looking for anything good to build hope and something for this bunch to hang their helmet on at the end of Saturday’s game. WPS