Wellick returns, gymnastics set to open at No. 3 LSU 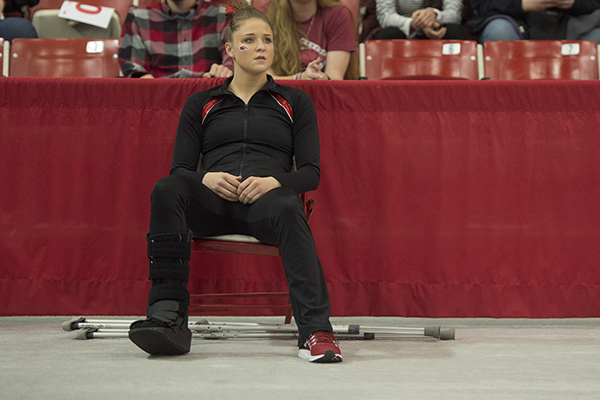 Amanda Wellick of Arkansas watches her teammates against Missouri Friday, Jan. 13, 2017 at Barnhill Arena in Fayetteville. Wellick was injured during warmups and was pulled from competition.

FAYETTEVILLE — The No. 19 Arkansas Razorbacks gymnastics team embarks on the nation’s second-hardest schedule tonight with a rare season opener against an SEC opponent.

But at least 16th year Coach Mark Cook’s squad will have gymnast Amanda Wellick back to take on No. 3 LSU for the 7:25 p.m. meet at the Maravich Assembly Center in Baton Rouge, which will be televised live on the SEC Network. The Tigers are the defending SEC champions who finished second at the NCAA Super Six last season.

Wellick, a senior, missed almost all of last season to rehabilitate a torn Achilles tendon. The all-around performer is expected to compete on three events, the vault, bars and balance beam.

Arkansas’ schedule, which features meets against nine top 20 opponents, including six in a row to open the season, was ranked the nation’s second-hardest by Road to Nationals, the web site that covers NCAA gymnastics.

“It will definitely make you rise to the occasion,” Cook said. “We embrace that. This is starting it off really hard, but it will give us a chance to see where we’re at.”

The Razorbacks, who finished third in the NCAA Fayetteville Regional and did not advance to the championships, are expected to bounce back from an injury ravaged year in which they posted their 12th consecutive top 20 finish.

“We’re in a lot better shape than we were last year,” Cook said. “This team has worked really, really hard this preseason.”

Junior Sydney McGlone is back on the vault and floor, while sophomores Michaela Burton and Haley Garner are expected to go up on three events each, the bars, beam and floor.

Arkansas should receive plenty of scoring from its big six-member freshman class, tied for the highest in the SEC. Redshirt freshman Sarah Shaffer, whom Cook called a “game changer,” is back from injury and slated to perform on the vault and floor. True freshman Sydney Laird is expected to be in the beam and floor lineups, and true freshman Sophia Carter is in the beam rotation.

Go Hogs!! We will be watching.

I’m anxious to see Hailey Garner this year. She was dynamic on the beam last year, and she is moving to the AA this year.