Given Razorbacks star Kevin Kopps’ usage in the regional, Arkansas is hopeful Caden Monke, who has experienced troubles of late, can return to form as one of its most trusted relievers vs. NC State: 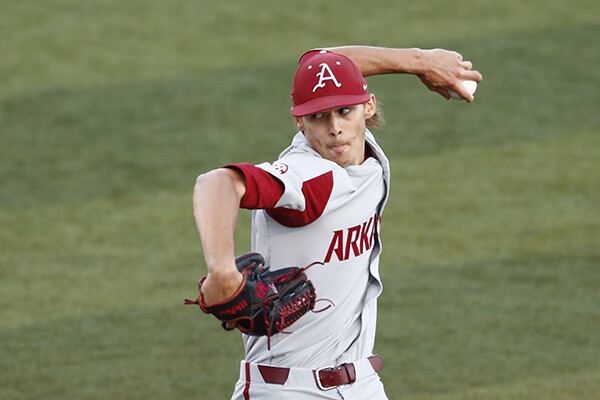 Arkansas relief pitcher Caden Monke made one appearance and worked 1/3 of an inning in the NCAA Fayetteville Regional.

I don’t think his rest was an issue. Throwing strikes was. Hopefully he can do that again.

Getting the ball close to the strike zone was his problem. He has been wild the last 2 times he took the mound. It would be nice to see him take the ball and get a few outs.

I wasn’t saying his rest was an issue. He’s well rested because he didn’t pitch much last weekend.

I will be from MO on this one. Show Me! Throw strikes and get people out. Don’t be cute. Show that you are a D1 pitcher

Did any of you critics have dominant performances every time you took the field back in Little League?

No, but they weren’t depending on me to win a national championship. Or even a league championship. Monke has not been reliable and he’s been on the shelf lately as a result. We talked about Muss shortening his rotation in the tournament. DVH is doing the same thing, And if Monke can’t throw strikes he’ll be a spectator for the rest of the season, whether that’s two games or three weeks.

I always thought I was Sandy Koufax. Unfortunately, no one else shared that opinion.

SwineFusion, I understand what you are saying .

However, I’ve seen comments (in other threads) questioning whether they are D1 players, comparing them to Legion players, etc etc.

ANYBODY can criticize. It seems to happen every year about this time, on the baseball board, from people that don’t even normally follow baseball.

The watch a game or two and suddenly they are experts.

I have watched all year! In my opinion Monk has been trying to over throw and once he fails to get a close call he’s not able to control the situation. His control hasn’t been there in the last few outings and with the big stage the hogs are playing on can he handle it! It could be pressure but if he don’t perform he will need a cushion to get comfortable on the pine.

I think I’ll follow other leads on Monke. If DVH & Hobbs & Opitz say he’s looked good in practice and they say he’s ready then so do I.

You guys can blame them if he isn’t, OK.

The problem with Monke is what makes him so hard to hit is the same thing that makes it very hard for him to consistently throw strikes.He has so many moving parts in his delivery that if any are just a little off the ball is not going where he wants it. Very much like a golf swing,everything must be in the right spot all the way through your swing or you’re in trouble,same with Monke,when he’s on, he is Nasty!! but when he’s not he won’t last long.