Here are the pitching matchups for the Razorbacks’ series vs. Murray State: 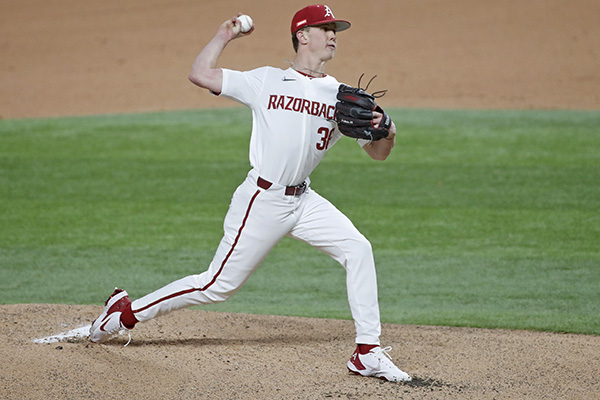 Pallette to get Game 1 start for Razorbacks vs. Murray State

Arkansas second-year right hander Peyton Pallette has moved into the No. 1 role for the Razorbacks’ series against Murray State.

I would have guessed this before the trip to Texas. I knew Van Horn wanted Pallette to pitch against Texas. He may say it’s not a big game to him, but I know for a fact that it is. And, it is to his mentor Norm DeBryin. Best to keep that to himself, but I don’t think it will ever change, that DVH enjoys the Texas games.

In other words, I’m not surprised that Pallette is now sitting in the Friday slot. If they had played Texas on the Friday night to start the season, Pallette would have never left that spot.

When your two returning weekend starters are (currently) not starting you may have some talent on the mound. I kinda thought after Nolan had a great outing last week he may get a start.

DVH has plenty of options.

I hope it’s because last year’s starters have just been beaten out by incredibly talented newcomers. I hope they didn’t lose ground over the shortened 2020 season & over the summer & fall.

Bolden has to be able to throw strikes with that new slider, not even close last week,teams will make him prove he can do it,if not he’s will have to go with the change-up as his out pitch, I’m still just not sold on Lockhart who had a 4 plus era in a much lesser conference. I really thought Noland would get a chance since he is proven he can get SEC hitters out we will see how that transpires

We may see a few more changes before conference play begins. It sure is a luxury to have so many quality pitchers to start. The roles in the bullpen are just as important as the starters. This should be a good fun year to watch our hogs.
We may see Noland on the weekend at some point too!

I think DVH is grooming as many pitchers as he can before league play. Getting their feet wet and evaluating them in real games. Knowing he has 2 experienced starters in the wings. One of them was outstanding in his only appearance so far.
Palletes a lock Friday nighter right now. Next 2 spots could get toyed with depending on upcoming performances.

Van Horn said yesterday that Bolden essentially talked him into a short-rest start last week. He thinks he didn’t give Bolden enough time between outings, which would explain the difference between how he looked against Texas and how looked against SEMO.

I think the starting rotation is less important this season because of the expanded rosters. Teams can play and travel more pitchers than they could in past years.

It makes it easier to pull a starter early if he isn’t pitching well, like what happened with Bolden last Thursday. And because there are so many pitchers with starting experience, there are a lot of arms with long-relief capability in the bullpen.

With the number of midweek games, there are good pitchers who aren’t going to pitch every week right now. Blake Adams, for instance, still hasn’t pitched and the coaches have liked what they have seen from him. He was going to get into Sunday’s game against SEMO, but the rain didn’t allow for it.

There is a lot of talent. It’s just a matter of the cream rising to the top and those with the best stuff claiming their spots and owning them.

Matt is right, Bolden on three days rest was a gamble for sure. I bet he is much better this weekend.