At first, I was scratching my head about your post?

Didn’t know why we should care about the Weather at the GA @ SC game tomorrow. Then it dawned on me that there are 2 SEC teams in the city of Columbia, both SC and MO. And that you were talking about a week from tomorrow.

I hope I end up in Columbia, Mo. not Columbia, SC.

About 40 years ago I ended up close to going toGreenville, SC when I was trying to go to Greenville, NC.

My travel agent (remember them) booked the wrong flight out of Tulsa. I was covering Tulsa-East Carolina.

I told her the destination city was Greenville, NC. I typed it for her on a piece of paper. Do you remember typewriters and letters?

She got me an airplane ticket to Greenville. It did not have state listing on ticket. No way that you would be alert of a screw up. I did know not there was no airport close to Greenville,SC.

After flying from Tulsa, I was boarding plane in Atlanta when delta gate attendant said flight is to Greenville, NC. The travel agent sure did not.

I put the brakes on and refused to board. They re-routed me to Raleigh-Durham and got there midnight Friday. It’s 90 minute drive to Greenville.

Delta talked Avis into leaving me a towne car. It was waiting for me. They knew all rental desks would be closed with my late arrival and no reservation. I nice lady waited for me.

Game was next day. All turned out fine.

Travel changes were once easy. They just viewed my ticket as currency and worked it all out.

My travel agent assumed Greenville was a border town. Did not know they were 5 hours apart. Now that’s a head scratcher.

I bet decent chance the Alabama game in Fayetteville will be cold as well. I remember some pretty good December ice storms during school up there in December if not some early decent snows.

I can only think of one Fayetteville game that was played in the snow. I think it was against SMU in the early 1970s. Could get another one in two weeks. Then again it may be 75 degrees, as weird as the weather’s been this year. There were some flurries against Baylor in '91 but it wasn’t really a snow game.

I went to a Hog-Auburn game, around 91-94, that was sleeting and completely miserable. the stadium sold out of hot chocolate and coffee.

that was the coldest game I ever went to…until the Liberty Bowl vs East Carolina. holy schnikey, that was cold.

Game in 1995 against what was then Southwest Louisiana (USL), now Louisiana-Lafayette, had snow on the ground. They had to scrape the field that morning to get the snow off, it was piled up along the sidelines. That was our one good season with Danny Ford, winning that day made our record 8-2. Unfortunately, that was the last win that season, finished with losses to LSU, Florida, and North Carolina. The 1993 game against Auburn was played in pretty heavy flurries in the second half, Auburn was pretty proud of itself for winning the game in a cold weather site. That was their undefeated season in Terry Bowden’s first year, but they couldn’t play in the SEC championship game or bowl game due to being on probation.

I do remember that USL game being cold but didn’t remember snow. Then again I was in southeast Texas that day listening to Paul.

I thought it snowed during LSU game in 1992 in Fayetteville.

We drove up the Big Trail the morning of the U La La game and there was hardly any snow on the ground until we got past Cass. By the time we got up into ridge tops to the north there was several inches on the ground.

The Cajun players were walking around in pre-game like they’d landed at the North Pole.

LSU game was extremely cold, in the 20’s. No snow though. Baylor in 1991 had snow flurries, about like the Auburn game in 1993. LSU game was Joe Kines last game as head coach, Arkansas won 30-6. The players carried him on their shoulders after the game.

I remember the Liberty Bowl game. Took my daughter, we had foot warmers, hand warmers, long Johns, army issue mittens and two Hunter Orange Jackets. I was still cold. Went to the bathroom and the traffic was unreal as tons of people had done quit watching the game and we’re just trying to keep warm. We still have the DVD because there were camera shots in the end zone and we stood out. I felt bad for those receivers trying to catch Mallets laser beams. You could hear them. She never complained. Good memories now.

That Liberty Bowl is the coldest I’ve ever been at a game. I remember a good number of fans were pretty tanked up by the second half, about like an NFL game. I tried taking my son to the restroom in the 3rd quarter, but the restrooms were packed, mostly with people just in there to stay warm. Women were in the men’s room, just to crowd around the heaters in them. Pretty inebriated crowd by then, not much modesty being exibited by the fans

Since I’m not close enough to attend many Ark. home games, one in war and one on the hill, I’ll just recall my coldest college game. The very first Music City Bowl at Vanderbilt stadium 1998 Alabama vs. Virginia Tech. At kick-off just chilly and breezy with slight rain around 50 degrees. By halftime it was sleeting and very windy and 30 degrees. The rest of the game was windy, sleeting & hailstorm and dropped to around 20 degrees. I think we left with about 5 minutes still on the clock .A miserable day with miserable weather esp. if you were pulling for bama. We were all borderline frostbitten

I live north of Columbia about 120 miles and we are expecting 27° degrees on game day that evening, you can almost always count on a breeze that will chill you to the bone. I’ll gladly put up with the cold for a win ! WPS

I was in college and working at WM Fiesta square, the LSU GA’s came in 2 hours before the game buying up everything that XXL in the store. Those boys were cold.
College was fun, 89 to 93, 2 years in the SWC, 2 years in the SEC.

The last game I can remember snow in Fayetteville was the 1993 game against Auburn. It snowed enough to cover the field the night before but there were only flurries during the game.

Columbia has felt frigid every time I have been there, which has always been between November and February because of football or basketball.

Columbia has felt frigid every time I have been there, which has always been between November and February because of football or basketball.

First time I went to CoMo was for an indoor track meet at the old Hearnes Center in January and it was COLD. I don’t remember it being that cold for the game that we coughed up the big halftime lead under Bielema, I guess that was 2016. Box score says game time temp was 42 which isn’t bad for late November.

The 2016 Missouri game felt cold. I’d be willing to bet wind chill was around freezing.

The 2016 Missouri game felt cold. I’d be willing to bet wind chill was around freezing 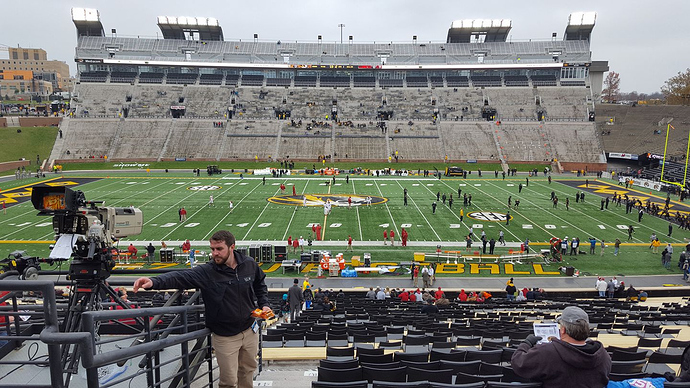 That was my view of the 2016 Misery game; some big-bucks donor decided to cash out on StubHub and I got these seats cheap. I do remember it feeling colder in the fourth quarter when we were puking up the lead. Box score also said winds of 7-12; temp of 40 with winds around 10 is a WC of 34 according to an NWS chart I just found.