We now have players at FSU, Texas, and OSU

Why not have a private conversation rather than airing dirty laundry publically?

Before long, coaches will be afraid to coach for fear of being called a racist.

Why not have a private conversation rather than airing dirty laundry publically?

Perhaps the young men believe that approach In the past has not yielded anything beneficial for their cause. The police shootings still occur. Had one Friday night. Upsets the young men. I get it. Horrible. And if they want to take a stand rather than play college football just so us older white guys can be entertained, so be it. They’ll perhaps lose a few things, but also perhaps gain some things. Not my business how they prioritize their education, career and life.

In case some of you younger guys have not noticed, the world is changing. In many ways.

Whether you like it or not, you have to know your audience especially with recent events and being in the cancel culture.

I wasn’t aware of OAN until recently.

You’re right about that.

You are liable to offend someone if you tie your shoes the wrong way.

Btw, serious question: Why is “The Eyes of Texas” offensive?

Got to know how to read the room, especially in today’s atmosphere. Here’s an example of why OAN may not be popular with some players…

Not quite the fact only, no opinion choice described.

Read about this yesterday. It has its origins in early 1900s in minstrel shows where performers would wear black face and sing it. General Lee used to say “the Eyes of the South are Upon You.” EOT is a spin-off or spoof of that. Apart from the black face issue I guess that’s perceived as racist.

Why is “The Eyes of Texas” offensive?

I’ve found it offensive ever since the first time I heard it played before we played them in football. It was particularly offensive when the game officials stood there with their hands over their hearts in games in Austin. It’s not as offensive as “Texas Fight” or the “hook’em” sign, but it’s offensive enough for me.

I can’t feel sorry at all for those tea sippers.

Any college football coach who wears an OAN t-shirt ought to know he’s going to offend almost all his black players. Frank Broyles got pissed at Lou Holtz for doing a commercial for Jesse Helms’s re-election after his first year at Arkansas. I completely understood why.

Any college football coach who wears an OAN t-shirt ought to know he’s going to offend almost all his black players. Frank Broyles got pissed at Lou Holtz for doing a commercial for Jesse Helms’s re-election after his first year at Arkansas. I completely understood why.

That’s why I posted what I did.

I wonder if Gundy could kick them off the team if they do something to offend him?

The shooting on Friday night? I am guessing you are referring to Atlanta where the man was drunk, resisting arrest, and tased the officer with his own taser first?

I’m not sure getting drunk, resisting arrest, or even firing a taser while running away are capital offenses.

If the state of Oklahoma told Grundy he couldn’t wear an OAN t-shirt it would violate freedom of speech. If player gets pissed about it, he’s exercising his. This isn’t a freedom of speech issue.

America is not being attacked from abroad, we are falling apart from within.

No they are not. But here’s the deal. If you’ll take a taser, you’ll likely try to take their gun. I’m pretty sure most of you jabronis criticizing cops have never ridden around with one. You should. Most cities have a ride a long program. Get a good look at it from their side. The proper response is to do what the cop tells you. If it’s a bad stop or unlawful detainment, sue the pants off the department for violation of the 4th amendment rights later. But if they tell you to put your hands behind your back, do it. I got pulled over in Clinton by a county mounty that was overzealous. When I asked him a question, he told me to get out of the car and put your hands behind your back. ( For a supposed speeding violation that was later dropped in court.) At that point, you either comply or you resist and resisting is stupid. So I complied. Was I pissed? You bet I was! But we have courts for that reason so I kept cool, let him cuff me while he finished writing the BS ticket and then won in court. You got cops being shot at their precinct (Fayetteville, Biloxi) and run over (Springfield). Go spend a few nights riding around with them and get a good look from the other side.

Of course the guy didn’t respond correctly. That’s not the question. The question is whether he should have been killed for the wrong response.

I’m not criticizing cops. I’m criticizing that cop. The fact is, the guy didn’t take a gun and fire it. He took a taser and fired it while running away. The guy broke the law. He resisted arrest and assaulted an officer. Even if he’d gotten away that night, they knew who he was and where he lived. He could have been arrested and prosecuted for the crimes he committed. Now, this cop needs to be prosecuted for the homicide he committed. The law applies to everyone, even cops. Simple as that.

Gundy looks awful in his O.A.N. shirt and has really stepped in a bi hot pile of stuff all summer. I guess he is consistent but he is beyond contrarianism now. 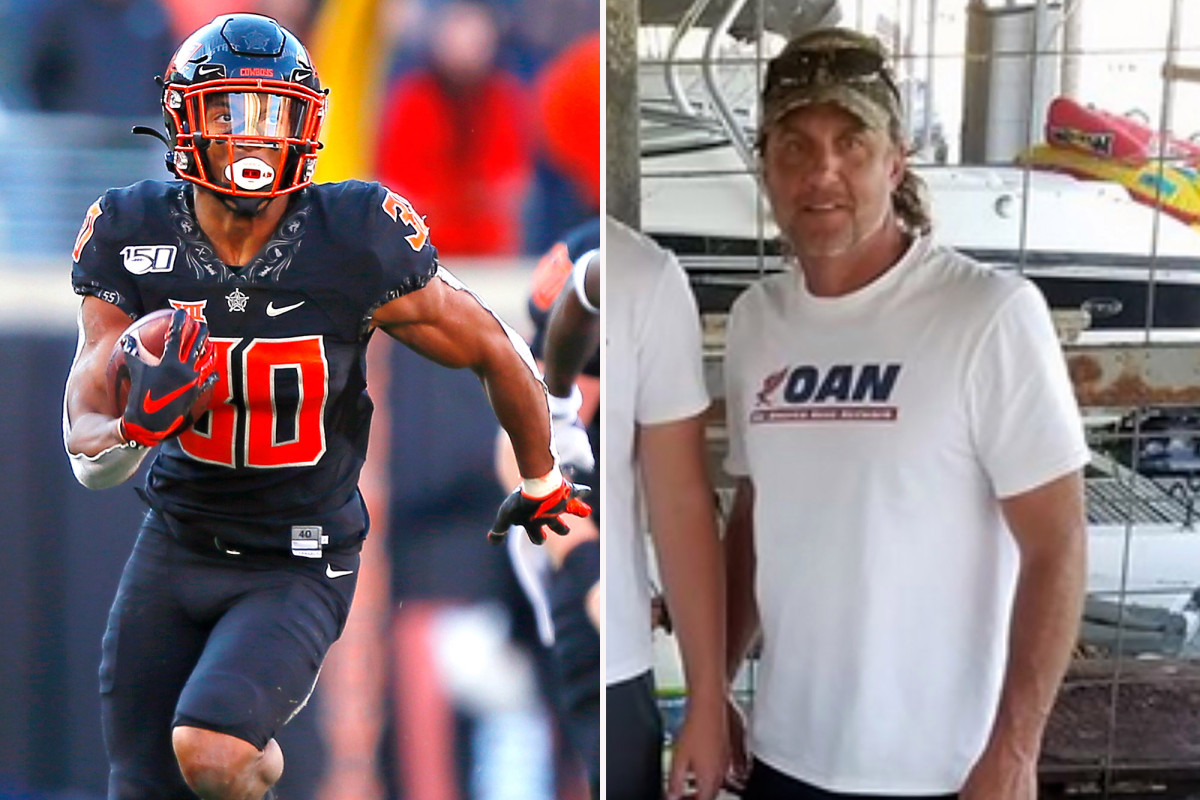 The nation’s top running back could lead a boycott against his own coach. Chuba Hubbard, Oklahoma State’s Heisman contender, is threatening to sit out of all team activities after seein…