WE got lucky last year (watch THIS)

And you need luck to win it all…

We also played Baylor their toughest game of the tournament if I remember correctly. Looks like we are headed for a sweet 16 matchup with this years predicted champion. Maybe we can upset the champion THIS year. Go Hogs.

Yes it was… And here it is, watch again… 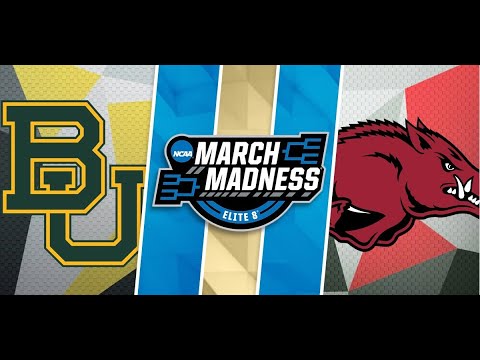 The team that wins it almost always has some good luck. The year we finished as runner up we’d won an earlier game (Syracuse?) when the other team had the ball & called timeout when it was out of them & we were trailing. That gave us two free throws and the ball with just a few seconds left. But you also have to be good enough that luck helps to win it all. Bad teams still lose even if they get several lucky breaks.

We’re good enough to win it all, but not so good that we can expect to breeze through the tournament. We’ll need some luck. Probably need some luck to get to the sweet 16. Will need more at each additional step. We’re also a team that could lose to a lesser team with some bad breaks or poor play.

The year we finished as runner up we’d won an earlier game (Syracuse?) when the other team had the ball & called timeout when it was out of them & we were trailing.

Correct. Lawrence Moten of Cuse called the TO they didn’t have. Scotty Thurman had two FTs after the T that would have won the game. He only made one, so it went to overtime. Then we scored literally on every possession of overtime, and still almost lost when a long 3 rimmed out at the buzzer.

I remember Jim Boeheim saying afterward he was amazed at the amount of venom the fans in Austin were directing at us. It sounded like one of his games at Georgetown or St. John’s.

We got lucky with the upsets last year getting to play lower seeds leading up to the Baylor game. Gonzaga is not going to be so lucky this year.

Doesn’t make any sense to me saying who we played was LUCKY… the first game was earned based on our season, then we beat a 6 (no slouch), that 15 seed Oral Roberts was hot as a firecracker and BEAT those unlucky higher seeds.

You wanna talk lucky, look at our draw in 1990. Beat 13 seed Princeton by 4 in the first round. Dayton, 12 seed, took out 5 seed Illinois in the first round, then we beat the Flyers by 2, right after #8 North Carolina took out #1 Mobilehoma. We blew out UNC in the Sweet 16 in Dallas, then got 11 seed Texass in the regional final and won by 3. Got to Denver and never played anyone higher than an 8 seed. Then of course Dook blew us out in the Final Four in Denver.

A story about that second round game in Austin. All three of the SF family attended, but we only needed two seats; my son was in utero at about the 5-month mark. The UNC-OU game was first that afternoon. The Carolina band is playing Twist and Shout during a timeout and my son starts kicking. I tell him to this day that’s the only time in his life, pre- or post-partum, he ever danced. Then Arkansas-Dayton started, and the Texass people are instant Flyers fans (this was about a month after Strollin’ with Nolan). A lot of four letter words flying at Nolan and the team and the band and the fans, especially from two sphincters sitting right behind us. When Todd Day hit the winning shot with like 2 seconds left, I turned around to let those two have it. They were hightailing it out of there. Typical Texass cowardice, dish it out and can’t take it.