We almost got our's beat

By a buncha well coached nerds. But by the grace of Bryce, we didn’t. The Aggies did get their’s beat by a more formidable buncha nerds last week, and they look like a different team tonight. Games like this are a reality check. A reminder that you gotta bring it every week. No down time in a college football season. Give ole Uneasy Rider his due. The man can still flat out coach. He dadgum nearly ran our season into a ditch. But we survived. Mercifully, we survived.

That game mirrored a game Petrino coached at Arkansas when Alabama came to Fayetteville one year. We stunned the more talented highly ranked team and jumped out to a big early game lead. Only to see Bama turn it around and beat us in the end. They even had a big momentum swing in the return game too with a TD if I remember right.

Bobby lost that night and lost tonight as well.

Kinda shot that TD pass from Cade Fortson (Fortin) to Hudson Henry in the wazzu.

That 4th down TD pass was almost identical to a play against LSU in BP’s 1st (I think) year.

How did we let that guy leak out totally free?

Beware false prophets, still high on the fumes of week old burnt chicken snake jimbeau. I thought the 4th quarter would be clear the bench time, not praying for a miracle time.

Thought same as you actually. But that BP ditch hittin voodoo stuff showed up.

Dumbness. Take your pick as to coach or player, my guess is both. NEVER should have happened.
Glad we snaped out of our daze in the fourth quarter. Loved the punt return for the TD. Game changer.

The play I remember was executed by Ryan Mallet, same situation, short yardage on 4th down. To this day, I have never seen better execution including the play fake. I can’t remember who we were playing, but it wouldn’t have been year 1 (Casey Dick). I searched on YT, came up empty. I didn’t predict it, but as soon as it happened I had the flashback.

I think this play against LSU. 4th and 3, Mallett to Joe Adams over the top for a TD. 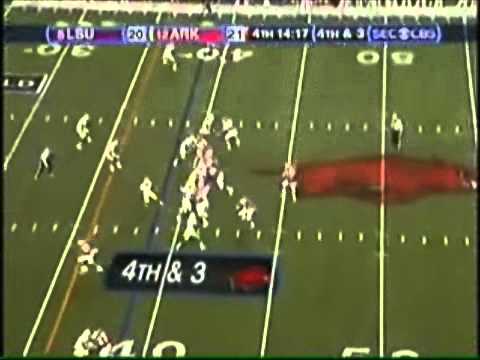 Actually the exact play Petrino ran against us, he ran against Georgia in 2010. It resulted in a 58 yd touchdown from Mallett to Chris Gragg. There was no Dawg defender within 30 yards of Gragg. I’m not going to link it but you can google Chris Gragg highlights and it’s the second play.

I was there and Gragg indeed was WIDE open and Ga was stunned.I had a feeling BP was setting us up for that when he was going for it on 4th and 1

It was called the Tap Play. Bobby said he thought of the play the year before when he saw LSU in that defense. If you notice, Joe did a “tap” with his right foot as he went by the LSU back. Certainly one of my favorite games. I think the only time I sat down was during half time,

I couldn’t figure out which game I was remembering. I went back and watched the highlights from a bunch of years. Turns out it was the Miracle on Markham II. We had 4th and 1. 30 seconds or so to go. The announcers were saying “just get the first down, don’t worry about the clock.” We went for it all and caught it of course.

Not exactly the same play as Saturday (memory does that to me!), but similar situation. 4th and 1 and throws the long ball for a TD. Watching the replay, at least LSU had our guy covered. We didn’t cover MSU’s guy at all.