But just because there’s not much else going on sports wise, here’s a few things that gave me concerns or thoughts going forward.

Pitching: Kopps and Ramage. Hope they can get it together. I know we have numbers, but I’d still like for a few to step up and be consistent and get people out. In spite of the comments from DVH, I can’t get calm or feel really good until I actually see it happen. Wonder where Wick and Noland stand in the overall rotation?

Franklin at bat. I wasn’t fond of his approach. Maybe looking to hit a home run every time? Will he stay at 2, or maybe drop down to 4 or 5? Plus, I’d like to see the replays, but I thought he threw the ball in to 3rd a couple of time when maybe he should have gone to 2nd? The Twitch app stalled a few times and I just couldn’t tell and heard no comments from the announcers.

I’d like to think Battles bobbles were opening day nerves?

Again, I know it’s early. Just throwing some stuff out there to see what people are thinking.

Wonder where Wick and Noland stand in the overall rotation?

Wick was warming up several times; I think he would have come in if Trest had faltered. Dunno about Noland. I suspect we’ll see both of them before the weekend is over.

Franklin looked like he was pressing to live up to his preseason pub. It’s the first game. We have 55 more. He’ll be fine. Same applies to Kopps and Ramage. Nobody on either team pitched well, really, except for the kid who started for Tech, but we got his pitch count up and got him out early. Trest pitched well enough to get the win but he also gave up a three-run bomb.

And we did just beat the #3 team in the country in spite of all of that. To quote Aaron Rodgers, R-E-L-A-X.

In all fairness that was a really good TTech team and playing them in their backyard. Some weird stuff happened and got a couple breaks, but to come back take the lead in the top of the ninth and hold them in the bottom shows some grit. Not surprised pitching had the normal early season jitters for both teams.
Good win though. The Coaches will take it from here.

Pitching: Kopps and Ramage. Hope they can get it together.

I’m thinking “pitching” in general will be our achillies heal this season. On the other hand, we did win.

While I’m not sold on Zeb as our Friday night starter (er, Sat in this case); Tech still had a goose egg on the scoreboard when he finished inning 4 (bad 5th). I’m reminded yesterday was Feb 20; not everyone pitches in 10 degree weather like I did in High School, but it was 47 at game time last eve with a wind chill of 44. That’s cold; tough on a pitcher. The winter makes the ball flat, breaking balls tend to not break well, pitchers compensate by aiming the ball. We’re still in winter, tends to go to the batters (or walkers) in this case.

The biggest problem that I see with Vermillion starting is finding a way to stretch him out to more innings. I thought he pitched out of trouble (and that is important) and did pretty well for his first game as a starter.

The biggest problem that I see with Vermillion starting is finding a way to stretch him out to more innings.

He’ll stretch. Nobody’s going to go very deep into a game in late February, even if they’re experienced starters,

For some reason the box scores last night didn’t include number of pitches and you can’t access the live stats, which did have pitch count.

TCU is leading Moo U 3-1, top 9, BTW. TCU let their starter go 82 pitches which was one out in the sixth, so he’ll qualify for the win if they hold on,

What’s with Noland out of the BP. I thought he was starter material.

For some reason the box scores last night didn’t include number of pitches and you can’t access the live stats, which did have pitch count.

Here you go (from my scoring app). It likely is not exact, but it should be close. 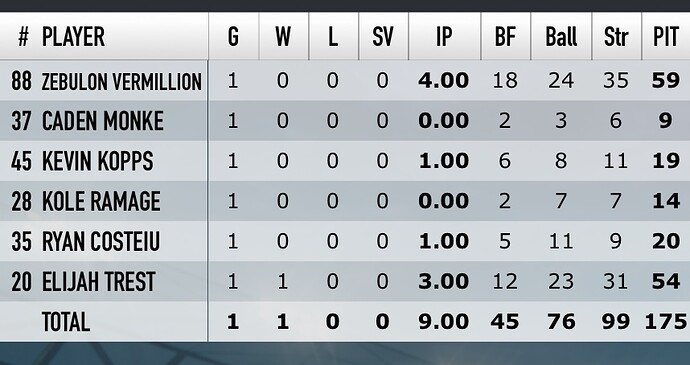 Weather is certainly a factor. I imagine five innings is it for most pitchers around 55-60 pitches for this cold weather.
My wife and I were jumping up and down when we took the lead, then lost it, then the top of the ninth we were sure hoping to win. An old adage in chess
is the winner is the one who makes the next to last mistake.

It was 72 degrees and no wind Saturday at Global life stadium. The roof was closed. It will be closed for the entire showcase.

Kopps didn’t really impress me last year. Ramage I have less concerns about. Looked like to me like most at bats hitters were trying to pull everything. Opitz was run on, unusual but I have little worries there either. Nesbit is good defensively but needs to hit. It will help when Goodheart returns.

It will take 2 or 3 starts to stretch vermillion out. Was not impressed w many of the guys who threw. Buts it’s early and still winter. DVH will figure it out

It was 72 degrees and no wind Saturday at Global life stadium.

I thought Zeb threw too many CB and when he went to FB he blew by their Stud hitter, needs to paint with the FB and put them away with cutter and CB, I bet he threw 70% CB last night.

Franklin looked a bit more comfortable at the plate tonight. Battles is doing lots of good things, he has been extremely solid in the field and at the plate.