Reminded me of my long-ago days at the Tulsa World, where I met Clay and silverlakehog.

Because Little League is often misused as a synonym for any kind of youth baseball, the World banned the use of the term “Little League.” It was to be referred to as “kid baseball.” I understand why they did that, but it was unnecessarily strict (much like another newspaper I worked for that banned the word “facility”; the publisher said a facility was a place to use the toilet).

I sincerely hope that this has evolved. The young man who consoled the pitcher who had just hit him in the head? He is a Tulsan. And he has been invited to the LLWS by Little League officials. 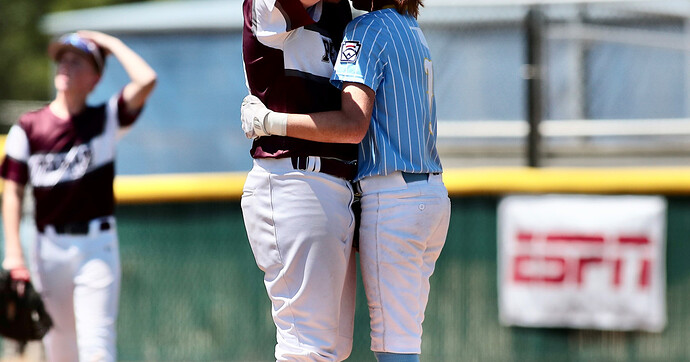 Isaiah Jarvis of the Oklahoma State Champion team out of Tulsa, Oklahoma, has been invited to attend the 2022 Little League Baseball World Series.

If the World hasn’t amended this policy, they would have to write about young Mr. Jarvis being invited to “a large kid baseball tournament in Pennsylvania.”

That other newspaper? Also banned the use of passive voice, such as “Jarvis was invited by Little League officials.” So when I resigned to go to PA school, I wrote my resignation letter in passive voice, lamenting that I would no longer be employed by them at their newspaper facility.

Tulsa World should know better. The word “kid” is offensive to young goats.

The kid who threw the pitch hasn’t received any recognition for his reaction to the inadvertent bean ball. He was visibly upset. He thought he injured Jarvis. He was crying into his glove. He didn’t reject that big hug from Jarvis either.

Too many kids today are just mean spirited, especially in super-competitive sports. How many kids would not have cared about the batter so much? Too many.

The League should have invited both players. Both are winners.

I’ve seen quite a few interviews with both kids. They were together at the Baltimore/Boston game the other night and both were interviewed.

Great to hear that! They’ll probably be best friends for life.

The League should have invited both players.

The other kid is already there as a player. Pearland, TX, won that regional and is playing in the LLWS.