Dudley - still room for you on the bandwagon for the real 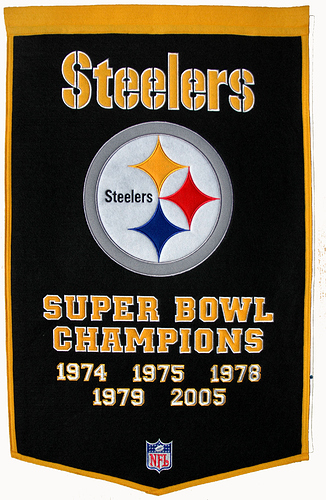 We still have our five, too.

Just been a long time since that last one.

I attached the wrong banner! #sixandholding!

Actually twitters thought you should have said “teams” not “team”.

I only have one football team. The same one for 50-plus years,

Jerry Jones has picked one good football coach in his lifetime. Jimmy Johnson. The Cowboys will never been good again as long as he runs the team. If we let him influence our coaching choices, we will continue to suck.

What about the Newport Greyhounds, Duds?

Cowboys need a new coach, new QB & trade Zeke after that let Stephen Jones manage the overall operation and in a short time the Cowboys will be relevant again.

First Jacksonreid… Steeler Nation has six titles… not the 5 on that banner. I have been and always will be a Steeler. It almost killed me when O’Donnell kept throwing the ball to where there was no one by that Cowboy DB. It cost us the game and didn’t it get him the MVP. Bad Memories there!!

Second, I always thought that Jerry was excellent as an owner from a business standpoint, but I thought his ego and desire to meddle was horrendous from a football point. I always thought that’s why he could not keep big time coaches (ie Jimmy Johnson, and Bill Parcells) they had as much ego as Jerry and didn’t want the interference. Clashes developed and they left. In Garrett it always looked like Jerry finally had his figurehead coach where he could really keep his fingers in the pie. That may be a dis-service to Garrett, but that’s just how it looked to me and why I figured he lasted as long as he did there.

Jerry Jones has picked one good football coach in his lifetime. Jimmy Johnson.