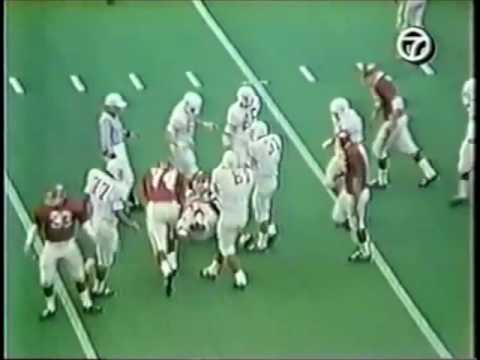 It brought back some tough memories of watching it all happen as an 18 year old. With four fumbles and two interceptions, the Longhorns should have been blown out. We had ample opportunities to put that game away, but they seized the momentum in the fourth quarter and would not let us take it back. The better team won that day, but we should have pulled the upset easily except --------------------- we didn’t.

Go Hogs. Let’s bring two decades of SEC seasoning with us and start this new era of UA/UT games off with a bang.

Don’t punish yourself by reliving that memory. That was my 1st football game to attend at 9 yrs. old & still find it painful.

Understand that JFB never revisited that game film. Had an opportunity to chat to him at length during a college pageant that he was a judge in 1980. Wanted to talk to him about that game but knew better than to bring it up.

I am not sure my Dad ever recovered from the heart break of that game.

He never really got excited about the Hogs or any sports after that game. My Mom was a different story, as she always loved the Hogs, especially the basketball team…

I don’t think I’ve ever gotten over it. No one who wasn’t around really appreciates what it meant. What’s even worse, by losing it the way we did probably set in motion a downslide. I’ve heard from a couple of people that our coaching staff was so let down after that game that it affected recruiting. I can’t speak to that, but we were never quite the same program after that. Of course, we had the great '77 season–Holtz was a good coach using Broyles’s recruits–but looking back that season was something of a one-off. Holtz never recruited to his potential and by the time he “resigned” in 1982(?), the program was doing poorly by the standards we’d become accustomed to. The Hatfield years weren’t bad but weren’t really satisfying to the fans.

In 1969, I thought our skill people were, in a different way, just as good as their skill people. Our lines played hard all game but the Texas offensive and defensive lines were bigger, man for man, than ours. I think that had a lot to do with them holding the momentum in the 4th quarter. I don’t think that will be the case this Saturday. With Ridgeway playing, we match their size pretty well in both trenches. It will be our first year to start QB against theirs, our running backs against theirs, and our receivers (particularly Warren, Jackson, Morris, etc.) against theirs that will tell the story. If we can avoid finding new ways to screw up our kicking game, get a few turnovers from our ball-hawking defense, and reduce, significantly, our penalties, we got this in a close one. JMVVVVVVHO

Bottom line is we were robbed as usual by SWC refs owned by Texas. Unbiased refs in that game and history would have been very different.

Bottom line is we were robbed as usual by SWC refs owned by Texas.

I agree about the consistent bias in the SWC with always having Texas based ref officials. But we gave up a blocked punt and lucked out when that did not cost us, got four fumbles and two interceptions and was only able to generate 14 points, gave up a TD, two point conversion, and yes they did ignore a clip on the QB scramble for a touchdown. But that was the only legitimate gripe about officiating that mattered. Meanwhile, an increasingly harrid Bill Montgomery, threw, under great pressure, two 4th quarter interceptions, taking chances, trying to will us to victory. If he had the protection that he had early in that game in the 4th, we win by 10. Texas size advantage and depth in their pass rush won that game for Texas. Peschel and Street made a great play on 4th and two. Montgomery and Dicus made great plays all over the field, in most of the game, but not in the 4th. We were a great team playing its best game of the season. Texas was a great team that played badly early but came back to dominate the 4th quarter to win in a very hostile environment. I hate them, but you got to tip your hat a little to them. There was no shame losing to that team and that coach that day. I think this Saturday will be different. Go Hogs.

I was six when I watched the game in my little rocking chair. My mom sent me to my room afterwards because I wouldn’t stop crying.

According to Bill McClard, the Hog kicker, as he teed up the ball for the opening kick-off the hog fans, most of the 47,500 in attendance, started calling the Hogs. The volume of it “stunned me almost like a clap of thunder. The ball fell off the tee, I picked it up, & the official was standing there, he looked at me and said, ‘I never would have believed that if I hadn’t seen it.’ I swear it wasn’t the wind.”

I recollect the Hog Calls that day being very loud. Hopefully the same with 75K+ fans Saturday night & on national TV. Would impress the many AR recruits attending this game.

With my parents, we made the 9 hour drive back to Houston that night in total silence. Remember being devastated by that loss for days aftewards but solidified my devotion to the Hogs & dislike of ut.

My recurring nightmare: Street to Peschel on fourth and three

They surprised us with the call, we still had two men on him, and it was a great throw and catch. A championship play. Poor Montgomery was trying to do the same in the 4th quarter with them knowing he had to pass, with the rush collapsing the pocket and him running for his life. He took some chances and they got two interceptions in the 4th that stopped our comeback. It was a great game.

I had just turned 13 and went to the game with my mom. My dad was in Vietnam. Will forever remember that game and the heartbreak. The 60s were the golden years for our program. I don’t think it has or ever will be the same.

I’ve read that book several times. It’s a fascinating study of the times as well as the game. I do tend to skip the chapter about the end of the game.