In four sets. That clinched a winning SEC record; they’re 5-2 with one match remaining and currently in third place in the league. I don’t even know who the HC is but the program seems to be on the right track again.

Watched them last night and my opinion of a game I know nothing about is they are team orientated with spirit and focus. Fun to watch especially at times I thought they were going down and they never gave up.

I don’t even know who the HC is but the program seems to be on the right track again. 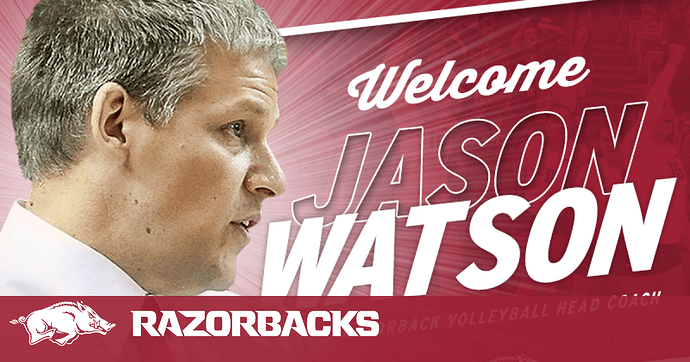 Jason Watson was named the head coach of the University of Arkansas volleyball team on January 7, 2016, to become the third head coach in program history. In 11 prior seasons as a head coach at BYU (2005-07) and Arizona State (2008-15), Watson closes...

Yeah I was thinking he’d come from Arizona or somewhere but too lazy to look it up. Still if they can beat TAM tonight at Barnhill they’ll be no worse than a third place tie, and might sneak into the rankings, They were 20th in the coaches’ voting last week but the coaches only rank 15 teams, Only two losses to #8 Misery on the road, and one of those went five sets.

Kentucky, by the way, is #2 in the country and leads the league. Florida is second,

There is no fall volleyball tournament, The SEC will do something in the spring based on what the NCAA decides to do.

That might be a tad high. We’re very good in track, cross country, soccer, softball and golf. Volleyball has been bad but is getting better. Gymnastics is not where it was a few years ago but I think we’ll improve under Jordyn Wieber. Swimming is decent, in part because the coach’s daughter is one of the very best divers in the country, but we’re not top 25. Basketball should be top 25 this year and continue to improve under CMN. Tennis frankly stinks, although we were 2-1 in SEC matches when the pandemic shut down the season in March. Maybe that’s on the way up too.

Anyway, I can think of several SEC schools, a few in the ACC and on the left coast that are better overall. For instance, Stanford won national championships in tennis, water polo, swimming, volleyball and rowing in 2018-19. But things at UA are improving. .