Drake Varnado posted tonight he will transfer to the Sun Devils.

As the story notes, he is one of three who has entered the transfer portal since the regular season ended. Mark Adamiak is in the portal, according to D1Baseball, and Vincent Trapani announced he was in the portal. 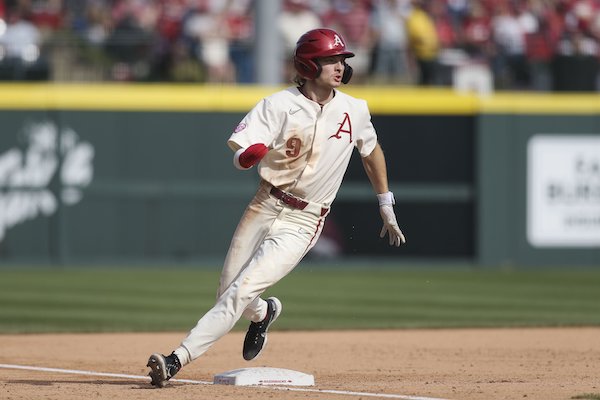 Varnado says he will transfer to Arizona State

Drake Varnado, who played his freshman season at Arkansas this year, will transfer to Arizona State, he said Wednesday in a post to his Twitter account.

Wow. Thought he would definitely figure into plans next year. Most of the IF will be gone.

Arkansas has signed a couple of JUCO infielders.

Yeah I heard this was probably going to happen.

Arkansas has signed a couple of JUCO infielders.

Matt? Who were the backups in our infield on the squad that went to Regionals? If Varnado did not make that travel squad, was he already beat out for starting next year? That plus next year’s recruits and transfers at his position must have told him they did not see him as the solution.

I think the backups at the infield positions are starters elsewhere — Moore at shortstop, Stovall at second base, etc.

The reserve position players on the travel squad are Bohrofen, Diggs, Leach and Soliz.

I am assuming that Varnado (or the coaches or both) did not see him replacing Battles next year and playing with his buddy, Stovall, at 2nd base. Or just more likely to start at Arizona State than here?

I know, sometimes, it is none of our business why a kid or staff or both decides he needs to move on. Is there anymore you can share about this without crossing over that line?

I know nothing about this particular situation. I do know that Az State is in a world of hurt for what used to be a top level program. They did get rid of their coach (the former Indiana coach), but then they hired a former player with NO coaching experience. Their record this year was 26-32 (13-17 in Pac-12 Conference).

My Arizona State fan friend doesn’t even follow them any more. He won’t until the AD and the current coach are long gone.

The western schools dominated college baseball in an era in which the sport was low-profile nationally. Once southern schools began to invest in the sport, the western schools got outclassed pretty quickly. It is hard for commuter schools like Fullerton and Irvine to compete like they once did. AZ and ASU have more resources than those kinds of schools, but it is not easy to get attention in a big city like Phoenix, and the PAC schools have less money than SEC schools anyway.

Too much to do in So Cal, including professional sports; many varieties of sports. College Sports are just so popular in places like Arkansas, Mississippi, Alabama, and South Carolina - places that are too small for the pros.

It would surprise me.

Is there anymore you can share about this without crossing over that line?

I don’t know his situation well enough yet to say why he left. It surprised me a little because he had been on the travel squad all season, but on the other hand, I’m never too surprised when someone transfers, especially someone who has not played much.

If we are going to live in the JUCO and Portal World why would freshman hang around? They sign with perhaps unreasonable expectations to start and then suddenly a portal guy comes in and they are set back one to two season. See: Leach this season.
I thought the bench was very thin this year due few freshmen except for pitchers.
I can only assume DVH couldn’t or didn’t want to convince the kid he had a shot next season.
I wish him the best. I hope it is not a big loss for us.

It would surprise me too, but his hitting took a huge step back this season. His D was stellar although he missed many plays due to shifting problems. Not errors just balls that went through that would not have if coaches had not shifted him. That was hard to watch and he holds no blame. I am a huge fan.
It is hard to tell if coaching had anything to do with his hitting woes and he might think he would improve faster in the pros. Hard to tell how the roles of coaching did or could have played here.
It could all be the player, but DVH said he worked extremely hard on his hitting so something was not working.
All angles need to be examined before he makes a decision. I have no doubt his dad will play a role in all this. I also think he loves it here and is invested in this program.