Vanover turning opponents away at an elite rate

Incredible, dominant and effective are some the adjectives Eric Musselman has used to describe Connor Vanover’s play. They perfectly sum up his defensive impact to this point in the season, and especially his last two games: 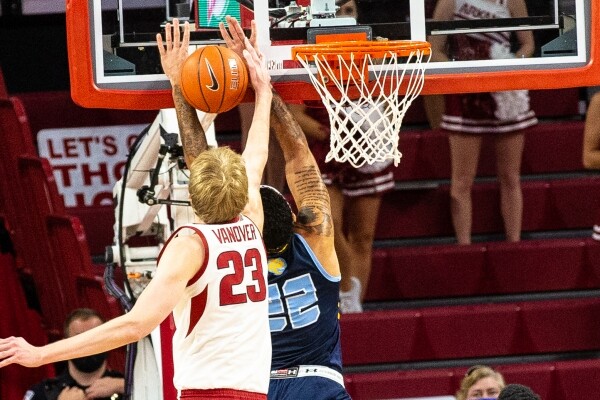 Connor Vanover has received nothing but glowing reviews from Arkansas coach Eric Musselman through five games this season.

I’m still wanting to see Connor with another 20 pounds of muscle on his body, but I’m not sure we’ll ever see that. Whether it’s Covit, graduating, or moving on to the professional ranks, I’m really having difficulty seeing him staying on the Hill for a senior season (and that extra year to bulk up). His performance thus far has been a very pleasant surprise.

Can’t help but wonder what he would look like and how he would be playing at nearly 250 pounds if he hadn’t gotten sick this preseason.

Conner has really surprised most of us who had not seen him play before. He is so huge, pretty athletic for a giant. He can shoot. He is going to be a force for us. I really had not idea he could be this kind of player.

Agree completely, he is even better than I expected and hoped for.

Exactly Scottie and he will need that weight when we start banging in conference play. Which will be the true measure.
So far a very pleasant surprise though.