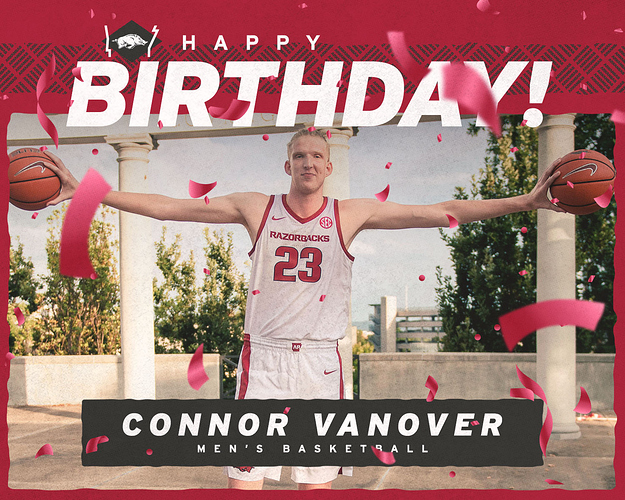 Birthday pic. Seems like Vanover is a quite a bit more muscular, assuming this is a recent photo.

He is certainly bigger. Ironically, though, as I saw the Instagram pic the athletic department posted to recognize his birthday (full body pic), I thought to myself… "He looks so thin!)

He’ll keep gradually adding weight over the next 10 years, but I seriously doubt during his career at Arkansas he will ever look anything but thin.

For an interesting comparison, check out Shawn Bradley’s pics throughout his career. Before college, he is crazy thin. On draft night (hugging David Stern) he really thin. By the time he’s in Space Jam, he’s starting to fill out more. I suspect Connor will do the same.

Not to be Debbie Downer, but I’m certain the photo was taken prior to last season. The team did a photo/video shoot on campus before the Red-White game.

Your post actually makes it even better. I’m sure he probably put more good weight on this last year. The previous posts just indicate that he put on some good weight at California.