Van Horn will not coach today

Phil Elson said on the pregame radio show that Van Horn will not coach today. He said Van Horn is in Hoover at the team hotel. 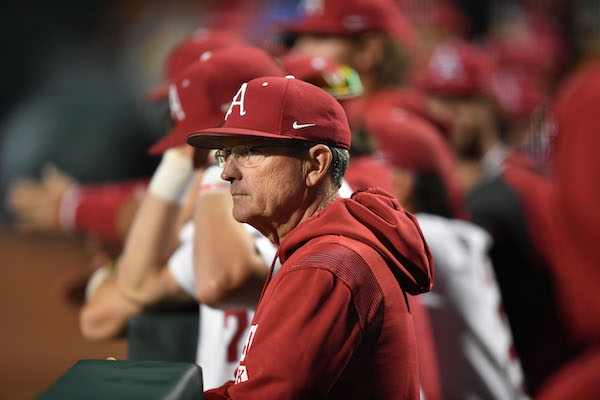 Arkansas baseball coach Dave Van Horn will not coach the Razorbacks' game against Alabama on Wednesday at the SEC Tournament in Hoover, Ala.

University of Arkansas head baseball coach Dave Van Horn will not be with the team for today’s scheduled game in the SEC Tournament. He is not feeling well, but is resting comfortably.

The only thing I could see keeping him from coaching is some sort of health issue for him or his immediate family.

I hope everything is well.

Well the obvious SPECULATION where we are today would be COVID

But I would think if that were the case there would be others affected. Which I suppose still could be the case

I sure hope he’s okay. But I don’t like going into this type of game without him

A lot of weird stuff this year

He’ll probably be on the phone to Thompson and Hobbs the whole time.

Hopefully we go out today and win one for the skipper!

Will McEntire will start today for the Razorbacks.

I hate not having him, but I’m sure he’ll have it on TV & in communication with the dugout. Besides, Thompson & Hobbs are capable of managing the game. The main thing is that our pitchers throw strikes and our batters hit well. We can improve our NCAA seeding with a win today. AU going down should help us.

Will McEntire will start today for the Razorbacks.

Wasn’t it reported a few days ago that the plan was for Hagen to start? Is there a reason that has changed? I was thinking that was a good idea now, since Bama hasn’t batted against him this season.

The plan was for Hagen to start sometime at the tournament, not necessarily today.

I hope DVH is okay. He is Arkansas Baseball! All hog. The hogs need to take care of business.

Thanks. I was wrong anyway because Bama did see him in the last game and knocked him out in one and 1/3rd innings.

Who is coaching the team; certainly not the guy in charge of hitting-less.

Praying for CVH, he is Arkansas Baseball and a tremendous example for our young men.

Now it’s not so much about baseball and pitching & hitting, etc. or anything else about the game(s).
Main concern is DVH and his health, really odd that he isn’t feeling well enough to coach the team. Praying for Coach at this point. Hoping it’s just something very minor.

Wording reads into a heart issue. Hope he is okay.

I don’t hear anything to suggest a heart issue