Here is a clip from this week’s HogPod in which Van Horn addresses in a little more detail what happened with Vitello in Knoxville last month. 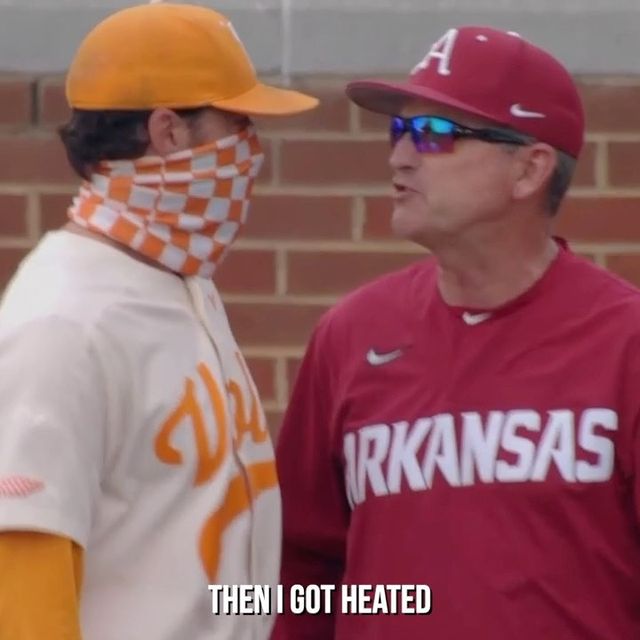 Recruiting only get more intense now that Tenn is getting really good, we still have enormous advantage in facilities but I’m pretty sure Tenn will be upgrading in the very near future.

When I watched Tennessee’s regional and super regional, I had flashbacks to Arkansas’ home games during the 2004 postseason. The crowd was so into those games and there were thousands of people watching from outside the stadium. It was a program kind of reclaiming its past glory. Tennessee went to Omaha for the first time in 16 years. It had been 15 years when the Razorbacks went in 2004.

I think Vitello has done a good job of surrounding himself with solid teaching coaches, and he takes care of the recruiting, which has always been his strongest asset. Tennessee is near some strong baseball areas, and if that program plays its cards right from the standpoint of investing in facilities and coaches, I think it can become a regular competitor with Vanderbilt and Florida in that division. It feels like they are on the doorstep of something special.

Thanks for finding that… I was in Mississippi when Ron Polk was the SEC Godfather of coaches and MSU started to take over with the Clark, Palmerio, etc group and gained momentum into the 1990"s with Polk. Last night at Omaha that crowd was over whelming MSU which badly wants a championship so I can relate to the comments on Tenn. The LSU run in the early 2000’s was similar in how the fanbase took on the baseball team which was non existent compared to football and basketball interest there.

Despite the Van Horn/Vitello conflict, never wanted Hog fans to go too far to dis Vitello. If & when Van Horn retires, Vitello might be a worthy replacement someday, assuming he would return to Arkansas.

I don’t see Van Horn retiring any time soon. By the time he does, TV will have established himself as an HC somewhere–probably Tenn–and wouldn’t want to leave. College baseball is still pretty stable as far as keeping coaches. That can change, of course, as the game becomes more popular & fans start demanding a winner in the way they demand one now in football & basketball. Still, I do not expect us to need Vitello for several more years nor that we’ll necessarily want him when the time comes. I hope by the time DVH hangs it up, there will be a former DVH Razorback player who will step in to carry on the Debriyn-Van Horn legacy.

LSU just hired the AZ coach who was coming off a CWS trip.

I believe that was announced about 4 days ago.

Agree & hopeful that DVH remains our coach for many years. Hopefully UofA will remain a desirable destination for baseball coaches who recognize our successful history & strong fan base as the SEC gets more competitive. When DVH was at Nebraska, it was understood that he was likely returning to UofA when Debriyn retired. I too would prefer we have a former UofA player as HC, but if Vitello is a very successful HC & if he wanted to return to UofA where he had experience under DVH, no reason to burn our bridges.

I doubt we’re burning any bridges with him. That doesn’t worry me.

Yes, new bridge construction is expensive but works most of the time…