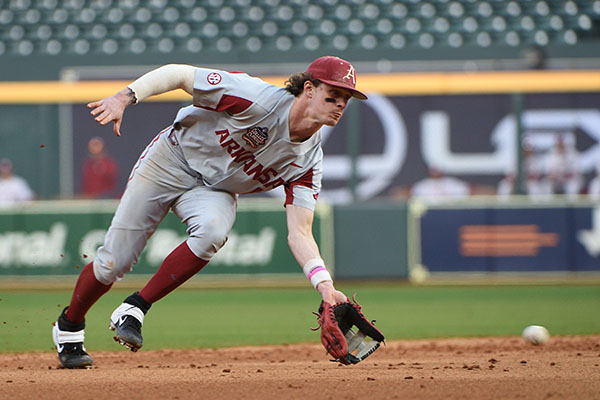 I wonder if the solution might be putting Casey back at 3rd base if we have a very good shortstop (Moore or Nesbit?). His best fielding and batting was his freshman year while playing 3rd base. Maybe the pressure of fielding at shortstop has also affected his batting mindset. He just seems to be pressing so much in his overall game.

I don’t think he was a better fielder at third base than he was at shortstop. He just didn’t have the ball hit to him as often at third base. And from a fielding percentage standpoint he has been slightly better at shortstop.

Casey is just going to make some errors. You live with that, if he hits. But he isn’t hitting. I wouldn’t throw him anything but sliders, and they don’t have to be strikes. He’ll swing at it, in the zone or not.

I think its the right decision that CDVH is sitting Casey Martin. IMHO, Casey has regressed since his freshman breakout year. Since his sophomore year, he’s had poor plate management swinging at bad pitches, swinging late and/or swinging for the home run. His poor hitting is now affecting his field play.

He needs to mature and play within himself. I am hoping he can recover but I don’t think he can due to his inability to do so with a whole summer and fall ball to work on his game. I know this sounds harsh, but by now I think its more mental with Casey than anything else.

It is very challenging for athletes when it becomes mental.