Little before my time, but I always heard about this guy. Must’ve been a bad a** wishbone fullback:

@dwil
🧵: Legendary Texas fullback Steve Worster, one of the inspirations for the creation of the Wishbone, died Saturday at 73. Darryl Royal once told his pal Duffy Daugherty, who wanted to learn the Wishbone, “You don’t want my offense, you want my fullback. https://t.co/y3TYsUNBUp 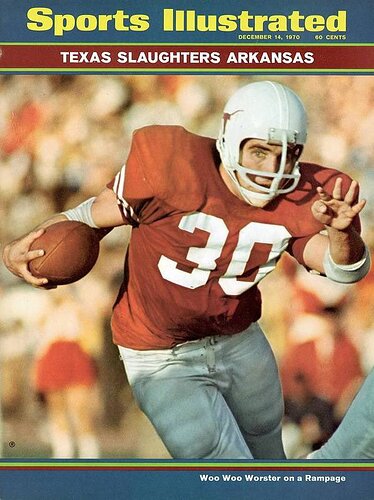 Ok, back to hating Texas.

Jim Bertelson, one of the halfbacks in that famed wishbone attack, died earlier this year.

They were the first UT team that I remember much about.

Have some class if you can find it. Someone died. Even Longhorns have family.

He was a tough dude. Prayers for his family, friends and teammates.

Darryl Royal once told his pal Duffy Daugherty, who wanted to learn the Wishbone, “You don’t want my offense…you want my fullback".

This quote was the first thing that came to my mind when I read the subject line.

He was a hard-nosed son-of-a-gun. One thing I will say about the Texas teams of that era - they played the game the way it should be played…as did JFB’s Arkansas teams. Both teams had absolute respect for each other, even as they desperately wanted to beat them.

RIP to THE original wishbone Fullback.

He was a real football player, and very hard to tackle and it hurt you more than him when you did. RIP Steve Worster.

As much as I hated Texas, I did like Worster. He could flat out run the ball. Give Royal credit, he could recruit and he knew what to do with talent when he had it.

Emory Bellard figured out the offense to match the TX talent which was also an OL dynasty. Super Bill Bradley and Wooster were the names in lights when the offense was rumored and then unveiled. Wooster was a bigger and badder Jim Taylor.

I believe J Street died a while back also. Will never forget that team and backfield, deep respect and RIP Steve Wooster.

Woo Woo was indeed a badass. Still remember the backfield: James Street, Wooster at fullback, Bertelsen and Ted Koy at halfback. In '68 when the Wishbone debuted, Chris Gilbert was the halfback instead of Bertelsen.

Koy is the only one still living. I believe he’s a veterinarian in the Austin area.

I had not heard that DKR quote to Duffy but it makes sense.

Related Hog trivia: Koy’s big brother Ernie Jr. was the one who punted the ball to Ken Hatfield that night in Austin.

Nothing but respect for that dude. He was a man among other men. Just more manly than those other men. Like trying to tackle a steamroller.

When I was a kid, we always talked about how the Hogs were going to feast on steer meat smothered in Worster sauce. Never seemed to turn out that way. That said, if they weren’t good it would not have matter to us. RIP.

He was one tough hombre for sure.
RIP Woo.

When I was a kid, we always talked about how the Hogs were going to feast on steer meat smothered in Worster sauce. Never seemed to turn out that way. That said, if they weren’t good it would not have matter to us. RIP.

Back in the day, Texas Football (which had a cousin publication, Arkansas Football) always polled all of the SWC writers for their pre-season top 3 in the conference, player of the year, their choice of the “key” game, etc. There were usually about 25 or 30 responses from writers in Lubbock, Dallas, Fort Worth, Houston, Waco and a few from Arkansas.

Being writers, they frequently tried to be a little cute with their brief synopses. The one I remember best - though I no longer remember who penned it (it was NOT Blackie Sherrod, but was worth of him…might have been Jim Trinkle or Mickey Herskowitz) - was from a year in the late 60’s, when describing his prediction for the “big game” that season (who else but Texas and Arkansas?)…

I’m not going to get it exactly, but this is pretty close:

I remember that line. I also remember thinking he had pulled a groin and both hamstrings stretching for that pun.