The college football world continues to take notice of the impressive staff assembled by Sam Pittman in his first year as head coach at Arkansas. After seeing his defensive coordinator, Barry Odom, commanding interest from a number of high-profile...

This is what happens when you have good assistants. Can Sam hold this one too?

Dated the 9th (yesterday) and first I had heard of it. If it is a story that has “come and gone” I’m glad to hear it. Simply bringing “new” (to the board…was not posted anywhere else that I saw here) information to the board as I come across it.

Well, I know you read other boards and the response posted that he gave a recruit, so I’m just repeating those.

Well, I know you read other boards and the response posted that he gave a recruit, so I’m just repeating those.

Not doubting that your information is correct, Rice. And not upset at your prior post. Just explaining that at the moment I posted it here, it was “new” to me and posted recently enough at the source I linked that I thought it was still fresh news. Apparently, it was not.

No problem, he could leave tomorrow, for all I know, and “old news” in Davis’ mind might have been two days ago, lol.

does not seem like a good mesh of what coach Davis does and what is desired at USC: 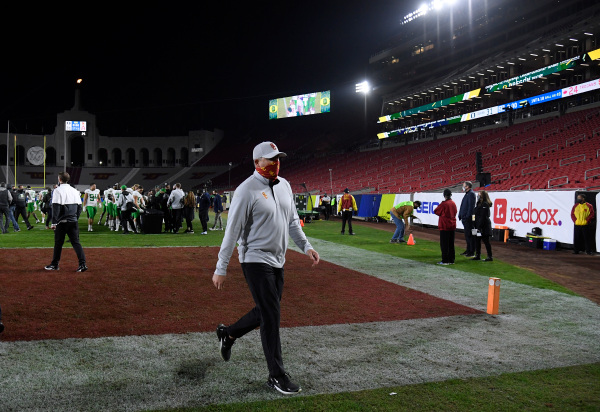 The USC Trojans made a coaching change… but not the one fans really wanted. It might be a good change, but we have to wait and see who the replacement is. USC head coach Clay Helton will coac…

I would bet there is not enough enticement to make Davis want to make that change, bad fit if it happens.

If I were an assistant I’d be hesitant to go to USC because Clay Helton’s job security has long been on shaky ground. Anyone who joins that staff might be out of a job in 10 or 11 months.

Davis turned down a much better opportunity last year from Texas A&M, where he coached previously. There is no guarantee this will keep him at Arkansas longterm, but his relationship seems very strong with Pittman and Odom.

Brad Davis is a fit for this area of the country, most notably the SEC. I would also think Clay Helton understands that. This is not the time to be heading to LA, or USC. Not a good idea for your family or your career.

USC had no clue how to run the football. And, that isn’t an OL coach issue, it’s a coordinator issue. I don’t know a lot of USC fans, but one I know doesn’t expect Helton to be there much longer.

This is how I felt about LSU trying to hire our assistants. Orgeron is about to be fired any second now, how can they hire any coaches? Not to mention the NCAA stuff. talk about the wrong time to move to Red Stick.

Fayetteville or Baton Rogue, laughable. Like New Orleans, it is a fun place to visit but I wouldn’t want to raise a family there.

I have been to Baton Rouge many times for football games. I know the way into town and to the stadium and have the path from the airport to the stadium memorized. I’ve yet to see anything that suggested it would be a good place to live.

My next door neighbor in Norfork (and that’s a loose term because I’m in the woods) is a retired Baton Rouge police officer. We talk about Baton Rouge and it’s clear he’s glad to be here. They still have family there.

I was at LSU for three years working on my doctorate. My daughter was born there in fact. Hate to be contrarian, but I liked it there. Except for the weather. And LSU fans. But I loved the food. Liked the culture. Of course, LSU has a super strong music department, which was why I was there.

I married an LSU girl after I moved there following college. My youngest was their homecoming queen in 2007 and still lives there. Other than being an opposing fan immediately before or during the game, not a bad place. I grew up in NLR, and it’s definitely a better place than central Arkansas. I do prefer Fayetteville by a lot.

Baton Rouge and area is a dump. Chemical plants everywhere. The whole state is very unappealing and dirty.

Well, Richard, why don’t you tell us how you really feel!!! LOL

Baton Rouge and area is a dump. Chemical plants everywhere. The whole state is very unappealing and dirty.

Richard, while I don’t disagree with your assessment of Louisiana and the rampant corruption that seemingly permeates many aspects of life there, and most certainly LSU athletics, I do know you enjoy good food and drink. So, as another who enjoys same, I have to be a little more forgiving and thank this crap hole of a state for giving us New Orleans.

I lived in Kenner right next to the lake for over a year and don’t miss one darn bit of it.