This SEC poll has the Hogs as #1 this morning. I didn’t notice, this was actually polled a week ago, before we beat KY. 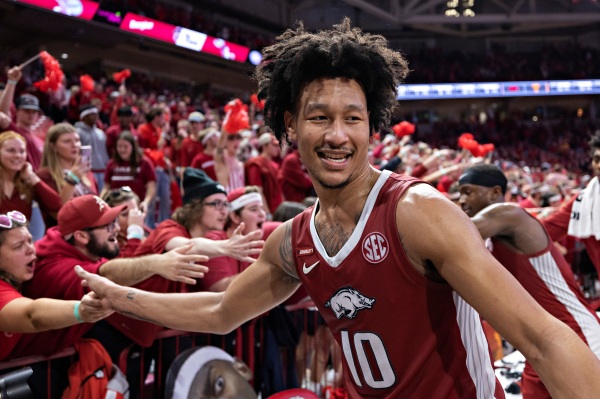 SEC Basketball Power Rankings: Yes, these Razorbacks are No. 1

" a reflection of how well teams are playing right now combined with how well they have been playing in the last few weeks."

This is what I was talking about in an earlier post on the subject. Each week the national polls should attempt to accurately reflect a ranking of which teams THIS WEEK stand compared to each other. If Team A catches fire and is playing better (especially in head to head, but not the only measure) than team B, then good grief, by what logic do you rank team B over team A? Maybe by next week’s poll it flip flops, but if team A continues playing at a higher level than B, maybe another team jumps them, but not B. I admit, I don’t know how such a ranking should affect ncaa seeding, but right now for example, Auburn who is playing at a 500 clip over past 6 games in a lesser or perhaps equal competition to the Hogs - and lost to the Hogs, if seedings were being done today, they should absolutely not be seeded higher than the Hogs! But they will be obviously, not becausue they are the better team, but somehow it was determined they deserved a 1seed (maybe 2 now), and them losing and us winning isn’t going to change that.