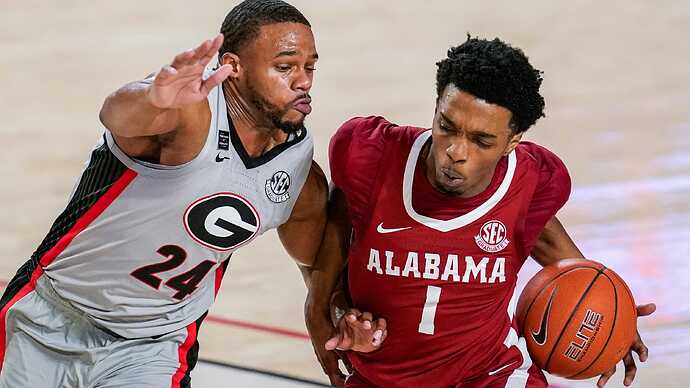 interestingly Tre Mann of Gators who was pOY elsewhere did not even make all SEC team for USAT, Cam over Moses is arguable to say the least. Maybe add in projected draft rank??

Tre Mann is laughable at best

I am thrilled to see Justin Smith, who I had doubted, make the second team. He has had a remarkable year, considering he had to suffer a mid season injury,

He should be on the first team instead of Watford, but I will take second team.

This is picked by 11 writers who cover the SEC for USA Today outlets. They all picked Nate Oats as coach of the year.

I think all of this is the fall out of our initial 4 SEC losses, er, our only SEC losses. Anyway, what got in everyone’s mind was our 2-4 start…and Bama being undefeated in the SEC for quite some time. A penalty of being a Johnny come lately.

Interesting that its UNAMINOUS for Oats as Coach of the year. Not even one vote for Muss. Personally I think Muss should be COY lost 80% of his production from the previous year and had to mesh a whole pack of freshmen and transfers into a solid team that finished 2nd. Oats most of his players returning.

Also interesting that Moses Moody (even though he didn’t get player or newcomer of the year) wasn’t even a UNAMINOUS choice for 1st Team All-SEC. Must be a hater out there somewhere.

I do not think any of the awards will be unanimous when the AP votes come out tomorrow.

This reminds me of the way D Mac was treated!

I don’t think it’s fall out. It is kind of like DVH telling me that all conference games count the same whether they early or late.

The NCAA selection committee does not weight games at start or end differently.

Should they be weighted with second half of season counting more? Maybe.

Schedule was front loaded heavy for Arkansas. But Bama won on road early and at Tennessee and LSU.

Arkansas won at Missouri and Alabama lost there late.

I used to believe the team winning at the end was rewarded. Sure is in football in polls.

And Arkansas is sitting pretty in polls and brackets. If Arkansas wins the SEC tournament it will sure look like the awards went to wrong folks.

The NCAA selection committee does not weight games at start or end differently.

Right, but the article is not about the selection committee, it’s about the politics and the politician kissers.

Based on these picks you would think LSU was the best team in the league.

It sure looks like Wade under achieved as coach. Did a nice job getting players. We know about that.

Alabama has a 2.5 game lead over Arkansas in the conference and had a tougher non-conf schedule. Plus Bama had SEC top tier road wins at LSU and Tennessee while Arkansas had one over Missouri. That may have something to do with it as well.

It may be an unanimous vote for Oats, but it is possible each voter believes it was a close win for Oats.

As you say, win SECT and this hardly matters.

Bama has a tough draw and probably won’t make it through to the final. Arkansas will have it much easier against Georgia and Ole Miss and should make the final.