USA medalists in the women's marathon

It’s only Molly’s third marathon ever, but she ran an extremely smart race in high heat and humidity and hung with two Kenyans virtually all the way, finishing about 20 seconds behind the winner.

Molly ran for Notre Dame in college. I suspect she has run in Fayetteville a time or two.

Molly Seidel (bronze) joins Joan Benoit (gold) and Deena Kastor (Arkansas, bronze) as one of three medalists in the Marathon.

I suppose you’re watching the equestrian now, including a young woman on the USA team with a very famous father, name of Springsteen.

My dream is to watch a three person photo-finish in a Marathon where none of the three knows who won. Not going to happen, is it?

I had already seen that. I’m getting tired of the focus on her parents. She is a talented rider with nice horses, but goodness.

Being able to watch complete replays of all the equestrian events has been great, except for the annoying app. I have to note the time when I stopped watching a 5 hour event, then fast forward to that place. Oh well, at least I get to watch the entire competition. The NBC coverage focuses on the US team and the winners, as you would expect.

That Molly Seidel is something else! Wow! At least the women’s track team brought it.

Joan Benoit was , and I guess still is, a hero of mine. I was doing a lot of running myself at that time and watched her race. We were in St Louis for a Cards series, but I could not leave the room until she finished. Don’t remember who won the baseball game, but I sure remember who won the race.

Seidel also gets bonus points for what she told her family in Wisconsin while they did the post-race made for tv chat: " Please drink a beer for me".

The wrestler who scored two points in the last five seconds of the gold medal match to win by one point being second on my list.

Yeah, that was amazing. Wasn’t he like down by four or five points with 30 seconds left? 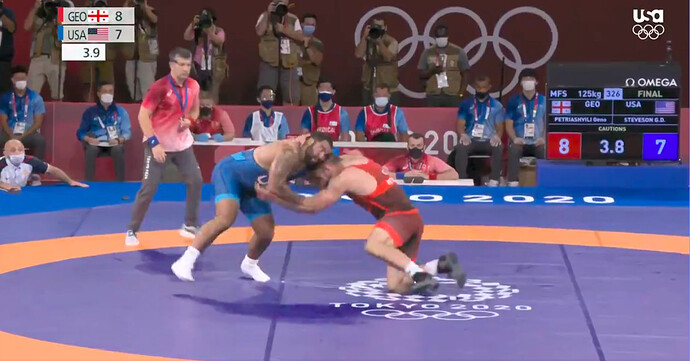 That was a great ending,but you know winning matches in last 10 seconds in wrestling doesn’t happen often but is not rare either. American David Taylor won the gold by doing something similar with 4 or 5 seconds to go in a different weight class.

The video does not show his trademark flip after the win. It is a must watch. Amazing 275 lbs can flip like that.

BTW, he still has eligibility left to wrestle for the Minnesota gophers next year.

I watched Taylor’s match. He scored late, but he didn’t score TWICE late. Steveson got a takedown, let the guy go and then got another takedown in the last 15 seconds,

I read that Steveson has ambitions of joining WWE. He might do that. Or he might go back to Minny and cash in on NIL for a while.