Hogs Taylor Werner and Katie Izzo were in the first heat of the women’s 5000. Werner finished sixth and Izzo was 10th; you had to be in the top five to advance to the final. Abbey Cooper, who ran at Tyson Track as a collegian as Abbey D’Agostino, won by about 100 yards because she pushed the pace to make the Olympic qualifying standard, which she beat by 2+ seconds.

The second heat included Lauren Paquette, who grew up in Little Rock, went to LR Christian, but ran at Baylor (as a walk-on). Lately she’s been training in Flagstaff, AZ, while her husband remained in Memphis where he’s a professor at Tiger High. But she dropped back to seventh on the final lap and didn’t qualify.

Another Hog angle in the trials – defending gold medalist Ryan Crouser is in the shot put field. Crouser is a volunteer assistant coach for the Hogs. The US Olympic contingent there will be chosen tonight, and Crouser currently leads – by more than 3 feet – at 74-2.25.

It looks like our best shots for UA athletes on the US team are Sandi Morris in the pole vault and Jarrion Lawson, but we’ll see if our pole vaulting twins can break through as well. Pole vault and LJ both will be next week.

And Ryan Crouser broke the world record. He threw 76-8.25 on his fourth attempt, breaking a 31-year-old world record by 10 inches.

Didn’t see you had posted this. I will use this thread to post anything further on the trials.

Ryan Crouser, a volunteer coach for the men’s team won the Shot Put with a world outdoor record throw of 76 feet and 8 1/4 inches. The previous record was held by former Texas Aggie Randy Barnes and had stood for 31 years. Ryan incidentally had set the world indoor court last winter In an American Track League meet in Fayetteville. Ryan is en fuego for the last 12 months.

In my separate post on the same subject, I noted Lauren Paquette from Little Rock Christian and Baylor was running in the second/faster heat of the 5000. She, like Taylor Werner, didn’t automatically qualify with a finish in the top 5 but got in with one of the five fastest other times.

Also Katie Izzo failed to qualify in the 5K, finishing 22 seconds outside the slowest time that made the finals.

Hopefully with Crouser on campus we can recruit some better throwers.

Here’s a story on Crouser with the detail that he built his own shot put ring at his Fayetteville-area home (doesn’t say exactly where) to continue training during the pandemic. 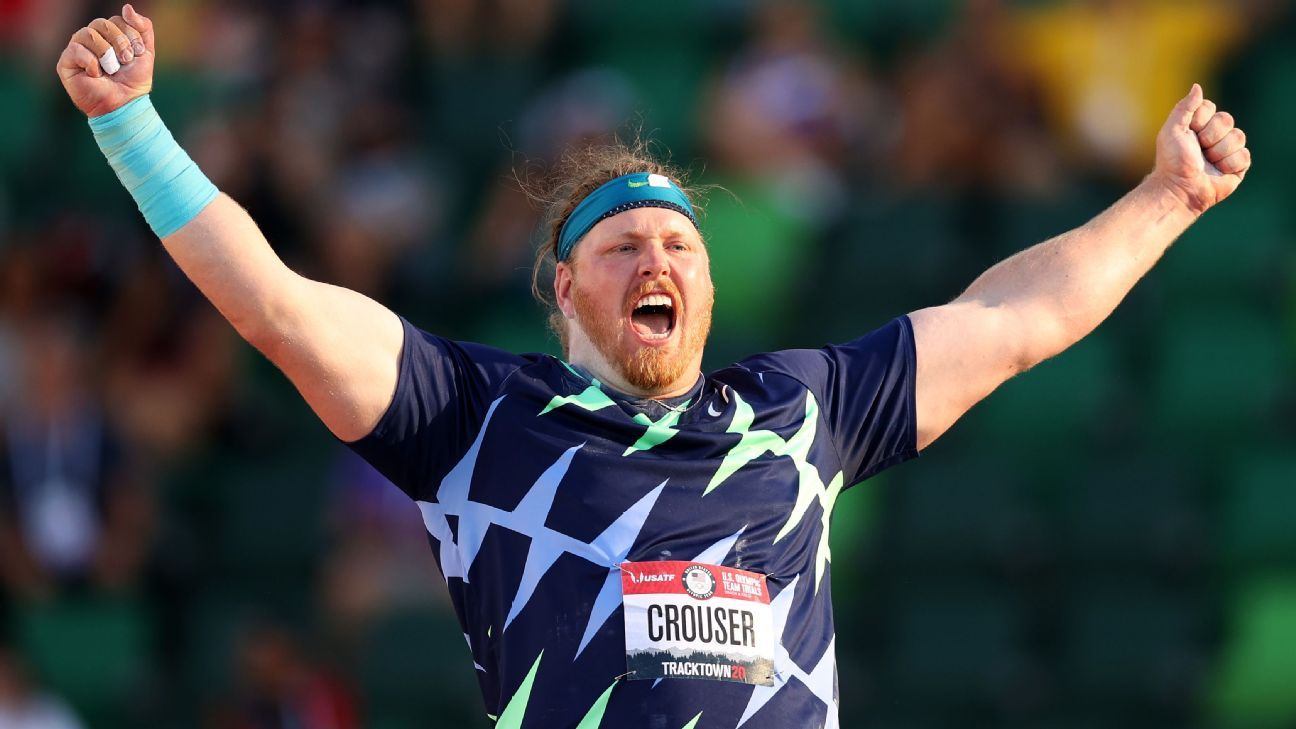 Ryan Crouser broke a 31-year-old world record in the shot put at U.S. Olympic trials with a heave of 76 feet, 8 1/4 inches that also qualified him for the Tokyo Games.

Thanks for catching Izzo. I was looking for her, especially since ADG had a front page article on her. The site I was looking at for results didn’t show her. I thought she may have scratched.

I watched the heat with her and Werner live.

All results can be found here:

Click each event in the left hand column to get detailed results. You have to click Friday to get yesterday’s results.

Thanks. Of course you can watch it live on NBCSN and NBC if you are by a TV.

It is sweet that Ryan is an Oregon boy and set the world at the Mecca of US Track & Field, Hayward Field in Eugene Oregon,

Taliyah Brooks (ex-Hog, current athletic department employee) just won her heat in the 100m hurdles in a personal best of 12.61 and advances to the semifinal. Payton Chadwick was in the next heat, and ran 12.66 to finish third in the heat and advance; 12.63 won the heat.

Andrew Irwin is in the pole vault prelims. He’s cleared 18-4.5 but because of some misses is only in 16th place. Top 12 advances and there are no ties, so he’s gonna have to clear at least 18-6.5 to even make the finals.

Which he did; 18-6.5 was good enough for 9th place and he advances to the final. And Irwin almost no-heighted; it took him all three tries to clear his first height at 18-0.5.

Also noticed that Asics had a TV ad featuring Taliyah Brooks that was clearly shot in Fayetteville at McDonnell Track and the Tyson Center. I get the feeling that if Taliyah had been competing in the NIL era, she could have done very well for herself.

Markus Ballengee won his heat of the decathlon 400 meters in 50.02, finishing day one with 3982 points which is good for 14th place halfway through.

Nikki Hiltz won her 1500 semifinal race and is the fastest qualifier. I’m not going to mention the subject of the prerace feature NBC did on her because it would cause heads to explode on this board.

Know what you mean.

One note. All the times for shorter races and jumps were impacted by a wind above the limit. I kind like to see trials run with a legal wind, so we can measure how well this USA team stacks up.

I kind like to see trials run with a legal wind, so we can measure how well this USA team stacks up.

It is what it is. Tokyo is going to be a weird situation anyway, with limited (or no) attendance; some people may need to feed off the crowd, some may do better in a relatively quiet atmosphere. The COVID emergency status in Tokyo was due to expire today, after which they were going to make decisions on how many fans will be allowed.

Payton Chadwick finished third in her semifinal heat of the 100 hurdles and will run in the final later tonight. Taliyah Brooks was sixth in her heat after clipping a hurdle did not advance but will be in the heptathlon later in the trials.

They just showed Hunter Woodhall winning the Paralympic 400M in an Olympic qualifying time. Those trials were held in Minneapolis.